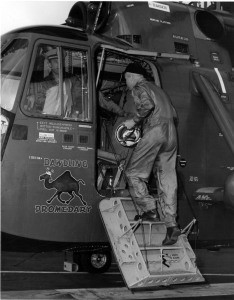 While the record flights that most captured the public’s attention in the postwar years involved high speed runs over desert sands that eclipsed the sound barrier or aircraft rocketing into the stratosphere, the technological progression of rotary wing aircraft resulted in a number of helicopter flights making their way into the record books. One of them occurred on March 6, 1965, when an SH-3A Sea King launched from the deck of the carrier Hornet (CVS 12) into the dark early morning skies over San Diego and headed east. Its destination was the deck of another flattop, Franklin D. Roosevelt (CVA 42) moored at Naval Station (NS) Mayport, Florida.

With a camel and nickname “Dawdling Dromedary” painted on its nose, the SH-3A Sea King making the flights carried a crew of three that included Commander James R. Williford (pilot), Lieutenant David A. Beil (co-pilot), and Aviation Machinist’s Mate (Jet Engine Mechanic) First Class Paul J. Bert (crew chief). The cross-country attempt came nearly three years after an unsuccessful attempt by another Navy Sea King and the crew felt the pressure to succeed lest subsequent record attempts be hindered. “A helicopter range record attempt would seem to imply even less planning in that a landing in a cornfield could be tolerated,” Williford recalled. “It wasn’t quite like that—the planning involved was intricate and the problems were numerous.” Included among the them were the inherent instability of helicopters, slow speeds and vibration that made long-distance flight a tiring endeavor on the crew, and the potential for retreating blade stall occurring with little warning.

Choosing the February-March for the flight because of the favorable winds and cooler weather that existed at that time, the crew figured out what equipment could be stripped from the aircraft. This included the heater, which necessitated the crew wearing cold weather gear to help ward off the chill at altitudes on the flight that reached 15,000 ft. At take-off, the helicopter had a gross weight of 23,000 lb. and carried 1,690 gallons of fuel. 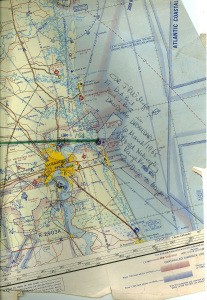 Section of the crew’s navigation chart showing the final leg of the record flight of the SH-3 Sea King nicknamed “Dawdling Dromedary” between San Diego, California, and Mayport, Florida.
Download

Flying a more southerly route than the flight path employed on the previous record attempt, the crew required a 10+ knot tailwind average. For the first 8-9 hours of the flight, the crew did not fly in these favorable winds and feared they would not successfully complete the flight. Yet, as they climbed higher, this changed and by the time they reached Valdosta, Georgia, they enjoyed a 35 knot tailwind. With their greatest fear being having to make a forced landing amidst the snakes and alligators of the Okefenokee Swamp, the crew breathed a sigh of relief when they successfully passed over that area, landing on the deck of Franklin D. Roosevelt at 11:10 PM EST after 15 hours and 52 minutes of flight time. Only 60 gallons of gasoline remained in the helicopters fuel tanks, the crew having flown a portion of the flight on a single engine to conserve fuel. They eclipsed the previous records by nearly 800 miles.

The completion of the first coast-to-coast non-stop flight of a helicopter brought accolades for the crew from Chief of Naval Operations on down, with Williford concluding that “the flight was executed almost exactly as planned; a combination of aerological, airframe, engine, and engineering talents.”