posted in AIRCRAFT IN THE SPOTLIGHT on October 23, 2012 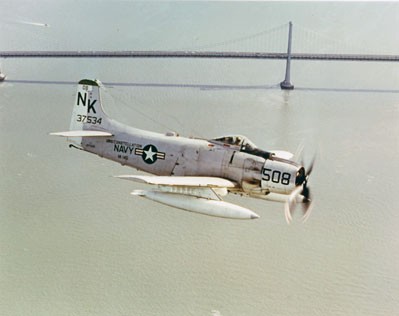 “I first flew the A-1 at Naval Auxiliary Air Station (NAAS) Cabaniss Field, Corpus Christi, Texas, in March 1954 as a naval aviation cadet….It was a big airplane after many hours in the SNJs.  We towered over the…F6F guys [fighter pilot trainees flying World War II-era Hellcats].  [I] darn near got the airplane airborne on the first taxi hop down the runway.  First flight was about like I imagined- being strapped to a rocket. [I] had to get used to what seemed to be nose low flying to stay level in flight…I did not think the AD posed any difficulties in its flight characteristics or coming aboard ship.  At the time I was about 6’4″ with plenty of right leg for rudder control [to counter the torque of the engine].”

“My longest flight was 7.8 hours.  This was a simulated nuclear weapns delivery on a target on the big island of Hawaii during an Operational Readiness Inspection…As I recall, these were usually low angle loft maneuvers.  They were long, boring flights where the thing to look forward too was pulling out the plotting board and eating a box lunch.  As a fellow aviator in Attack Squadron (VA) 145 put it, chances of survival in the real thing were slim.  This theory was after crash landing (we never figured on making it back) to run for four minutes and dig for five.”