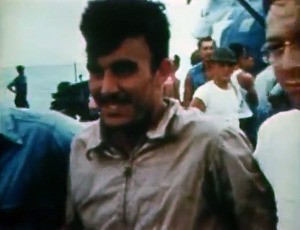 In famous director John Ford’s color film titled The Battle of Midway, an eighteen minute documentary that captures events of the landmark battle that took place in June 1942, one of the scenes shows naval aviators walking from a PBY Catalina to a waiting ambulance. Among them is a dark-haired pilot in a khaki flight suit, his broad smile reflecting the relief he felt over his rescue after floating in a life raft in the waters of the Pacific. The officer was Ensign John Magda.

A native of the Bluegrass State and graduate of Western Kentucky State Teachers College (now Western Kentucky University), Magda entered the Navy as an Aviation Cadet and received his wings of gold at Naval Air Station (NAS) Pensacola, in June 1941. Appropriately given the speedy thoroughbreds that were associated with his home state, Magda received assignment to fly F4F Wildcats, at the time the fleet’s fastest aircraft, with Fighting Squadron (VF) 8.

VF-8 eventually received assignment to the Navy’s newest aircraft carrier, Hornet (CV 8), which was placed in commission on October 20, 1941, less than two months before the Japanese attack on Pearl Harbor. Yet, VF-8 and other squadrons of the Hornet Air Group had little opportunity to operate from their floating home given the fact that Hornet spent time serving as the platform for transporting and launching the Doolittle Raiders on their bombing mission against the Japanese Home Islands on April 18, 1942. Yet, that changed in late May 1942, when Hornet steamed out of Pearl Harbor and headed to the northwest as part of the assembly of Pacific Fleet ships set to do battle against a Japanese Fleet approaching Midway.

The Battle of Midway, which occurred June 3-7, 1942, is justifiably viewed as a turning point of World War II and one of the greatest victories in U.S. Navy history. Yet, as with all military actions, not every aspect of the battle went according to plans and such was the case with Hornet’s air group. Only Torpedo Squadron (VT) 8 made an attack against the Japanese carriers, with the loss of all of its aircraft and all but one crewman, Ensign George Gay. The other squadrons never found the Japanese carriers, the air group and squadron commanders leading their charges on bearings that took them only over open ocean, with many of the pilots, notably those of VF-8, forced to ditch their aircraft at sea. Among them was Magda, who after four hours in the air set his F4F-4 Wildcat down in the Pacific in close proximity to squadronmate Ensign John E. McInerny, Jr. The two aviators scrambled out of their respective cockpits and into their life rafts. In the report he filed after the battle, the recently promoted Lieutenant (junior grade) Magda noted, “To elaborate on the five days existing in a rubber life raft is a very unpleasant thought to me so, instead, I shall endeavor to list a few things which this experience made me realize.” 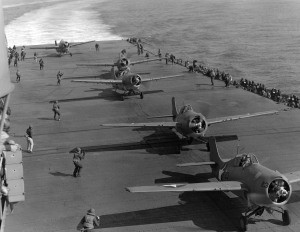 In his report Magda pointed to the need for an extra water supply and signaling equipment stored in the raft and the desirability of a large rubber covering to catch water and provide shade. Fish hooks, a net, and bait were recommended as standard equipment on a raft. “Raw fish may sound repulsive to a well-fed man, but when you are very hungry they are most welcome.”

On June 8th, PBY Catalinas searching to the north-northeast of Midway spotted Magda and McInerny in their rafts, the crewmen on board the flying boat pulling the grateful aviators aboard and transporting them to Midway, where one of John Ford’s cameramen filmed them.

This ended the first combat mission of John Magda, whose airplane was one of ten VF-8 fighters that had to ditch on June 4th. It would not be his last. Reassigned to VF-12, he eventually flew F6F-3 Hellcats from the deck of the carrier Saratoga (CV 3) and was credited with five kills, earning him the titled of ace. His final combat would come in the Korean War. While he served as officer-in-charge of the Blue Angels, the Navy decided to disband the team for combat service in Korea, its pilots forming the nucleus of VF-191 flying from Princeton (CV 37). While serving as squadron skipper flying an F9F Panther, Magda was on a combat mission over Korea on March 8, 1951, and pressed home an attack despite the fact that his aircraft had been severely damaged by antiaircraft fire and was burning. Though Magda successfully flew the aircraft out over open water, it crashed into the sea. He was posthumously awarded the Navy Cross.