posted in AIRCRAFT IN THE SPOTLIGHT on October 24, 2013 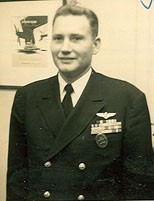 “October 24, 1944 was the longest day of my life,” wrote retired Captain James A. Shirley in a letter to a shipmate thirty-six years later. It was a day on which he experienced the highest of highs for any fighter pilot, shooting down five Japanese aircraft to become an ace in a day. Yet, it also marked the lowest of lows for anyone who has ever put to sea as a Japanese bombing attack sank Shirley’s ship, the light carrier Princeton (CVL 23) while she operated in support of the invasion of Leyte in the Philippines.

The day had begun in the predawn darkness as Shirley led his division of F6F Hellcats off the flight deck to fly combat air patrol. His squadron, Fighting Squadron (VF) 27, had been flying off Princeton since June 1944, but as the official squadron history noted its “big day” came on October 24th.

As Shirley and his fellow aviators climbed to altitude, they received word of radar contact being made with a large group of bogeys approaching from Luzon, which prompted the launch of more squadron aircraft, eventually bringing the total number of VF-27 Hellcats in the air to twenty. In a wide-ranging action that included intercepts of enemy bombers and fighters, the VF-27 planes were credited with shooting down thirty-six enemy aircraft against the loss of one of their squadronmates. Shirley was credited with five of the enemy planes, and described the air-to-air combat. “Just after daylight [I] began to make out an unusually large formation of planes of every Japanese make stacked in altitudes from 6 to 25 thousand feet and headed for our fleet…We started in head-on at our altitude of about 23 thousand feet and worked our way down as we had to. We first reversed course with an overhead run and each of us took out one or more planes on their first pass. Our speed advantage was about 50 knots, so we repeatedly made runs in through their formation. ” 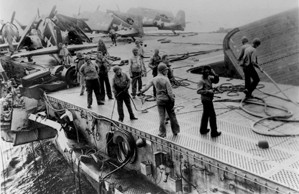 With fuel dwindling and ammunition gone, Shirley’s division retired and set course back to the carrier. For his actions, he would be awarded the Navy Cross. After recovery and debriefing, Shirley headed to the flight deck to monitor the installation of new gun barrels on the F6F Hellcat he had flown in the air-to-air action when he spied a lone plane entering a dive overhead. The time was 9:39 am and “I, and the men around, dived to the starboard side to the space between the forward gun mount and the island. I was about fourth from the bottom and there were others on top of me.”

The attacker dropped a bomb that penetrated the flight deck and hangar bay before exploding beneath a number of fully armed and fueled TBM Avengers. With fuel pouring out of them a violent fire erupted, filling the ship with thick clouds of smoke. As the day passed, violent explosions rumbled throughout the flattop, including one in the late afternoon that blew off the carrier’s stern and heavily damaged the light cruiser Birmingham (CL 62), which was alongside rendering assistance.

After the bomb hit, Shirley had made his way below decks to the ready room to await instructions and hopefully retrieve his pistol and flight log book. When the order came down to abandon ship, he went over the side wearing his Mae West life vest, which was fortunate given the choppy seas into to which he jumped. Spent from swimming away from the carrier, Shirley could not pull himself up a rescue ladder when he finally reached the destroyer Irwin (DD 794), two sailors literally pulling him onto the deck. He was one of 646 men from Princeton rescued by the tin can. 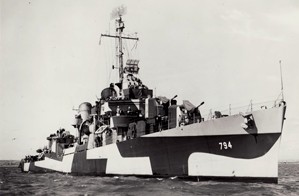 From the destroyer, the aviator watched the futile efforts to save the ship and her final slipping beneath the waves in the late afternoon after Irwin fired a spread of torpedoes to hasten the inevitable.

Flash forward to the day he wrote his letter about his longest day. “I am now sitting here in my home…writing for the first time about these events…yet I can, just as if they were happening while I sit here, taste the dryness in my mouth after aerial combat, see the arc of the Jap plane as he went into his dive and see the bomb separate from the plane on its way toward us, hear the explosions of the series of blasts, smell the smoke in the dark passages of the ship, strive against the power of the open sea, and feel the four hands which lifted me to safety.”