A recent donation to the museum by the grandson of Rex Beisel is a link to one of the most innovative and memorable aircraft designs in history.

Most people come to appreciate an airplane when it is in its element. This is true of the pilot harnessing its power in the cockpit or observers on the ground peering skyward watching it traverse the sky. What is more difficult to comprehend is the countless hours that took the airplane from an engineer’s vision to flight, the designers of some of the famous aircraft in naval aviation history always the root of an airplanes success in peaceful skies or the arena of air combat. In this tradition, a recent donation to the museum is a tangible link to the principal designer of one of the legendary aircraft in naval aviation history, the F4U Corsair. 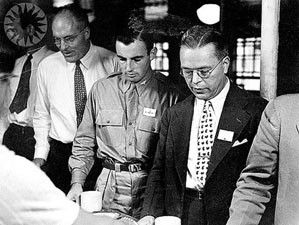 Rex Beisel’s path to a career in aviation could have been taken from the pages of a Horatio Alger novel. Born in California, he moved with his family to Washington state and earned his first paycheck as a teenager, his array of jobs including mule drive, coal mine breaker boy, surveyor, and salesman. All helped him work his way through the University of Washington, where he successfully earned a degree in engineering in 1916. In later years, the same university would graduate another engineering student who would achieve lasting fame in one Beisel’s most acclaimed aircraft design. His name was Gregory Boyington.

At some point in his early career, though we are uncertain exactly when, Beisel obtained a 1905 model Keuffel and Esser slide rule complete with a monogrammed leather case. “This was his “computer” of the time, performing all of the various calculations required to complete his designs,” wrote Beisel’s grandson Jonathan Day in donating the artifact. “I find the construction amazing, with the hardwood body, clad with ivory faces and natural hair cursor line stretched behind the glass-faced cursor. The movement/mechanism remain smooth and in perfect alignment.”

What specific projects this slide rule contributed to in the hands of its owner is unknown, but after graduating from college Beisel began a string of jobs at the U.S. Navy’s Bureau of Aeronautics and at private firms that included the Curtiss Aeroplane and Motor Company, Spartan Aircraft Company, and ultimately Chance Vought. While he received recognition for his work on radial air-cooled engines and contributed to the design of numerous aircraft, his signature work was the unique fighter plane that began appearing on Chance Vought drawing boards in 1938. 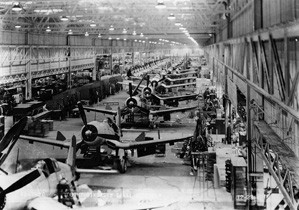 The Navy desired a fighter built around the new Pratt & Whitney R-2800 Double Wasp engine, its power making a top speed of 400 M.P.H. attainable. When it came time to design the landing gear, the issue of accommodating a propeller with a span of more than 13 ft. came to the fore. Engineers preferred shorter landing gear, which unfortunately did not solve the problem of the propeller. Subsequently, a meeting of principal engineers occurred in Beisel’s office. During the course of the discussion he turned to a sketch pad and drew out what would become the inverted gull wing that solved the design problem and made the F4U Corsair one of the most recognized aircraft to ever fly, its wing inspiring nicknames like the “U-Bird” and “Bent Wing Bird.” Man and machine would be forever linked.