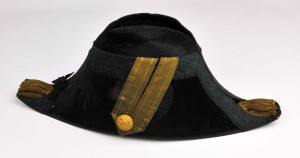 This fore and aft hat belonged to Ensign William D. Billingsley, the first naval aviator killed in the line of duty.
Download

Among the historic artifacts in the collection of the National Naval Aviation Museum are some that belonged to Ensign William Devotie Billingsley, who on June 20, 1913, became the first naval aviator to die in the line of duty. Once part of his dress uniform, the epaulettes and fore and aft hat were donated on behalf of the family by William Lee, who first came in contact with the Billingsleys when as a teenager he worked for a brother of William Devotie Billingsley at a grocery store in Winona, Mississippi. When he got older, Lee met another brother, who told him the story of their family’s tragic chapter in naval aviation history. That inspired a life-long dedication on Lee’s part to learn as much as possible about the fallen aviator and ensure that his story was not forgotten.

Hailing from Winona, William Devotie Billingsley ventured far away from home to attend the United States Naval Academy, graduating in the Class of 1909. An expert rifleman with a fondness for classic poetry, he made an impression on his classmates. “He has won his many friends by his constant good nature and ready sympathy,” one of them wrote in the Lucky Bag, the Naval Academy yearbook. “When it comes to nerve and determination, Bill is right there—he doesn’t know what the word ‘can’t’ means.” 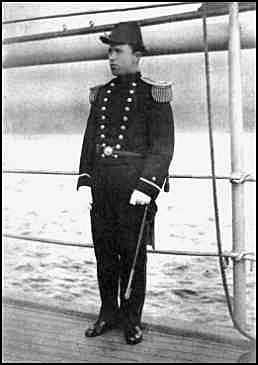 It was these latter qualities that perhaps inspired him to seek duty in aviation, guiding the primitive wood and fabric seaplanes of the day into the air a supreme test of nerve for those young officers that counted themselves among the first sailors in the sky. In the fall of 1912, he reported to Greenbury Point across the Severn River from the Naval Academy, the site of one of the encampments that was home to the Navy’s small aviation establishment prior to the establishment of Naval Air Station (NAS) Pensacola. Ensign Billingsley got his first taste of flying there as well as in the skies over Guantanamo Bay, Cuba, where the fleet traditionally convened for winter maneuvers each year.

Friday, June 20, 1913, the complement of aviators, mechanics, and airplanes having returned to Greenbury Point from Cuba, was a typical day of flying in the Maryland skies. A pair of seaplanes, the A-2 and B-2, was scheduled to fly across the Chesapeake Bay to St. Michaels, Maryland, on what then passed for a cross-country flight. Billingsley was at the controls of the latter airplane, with Lieutenant John Towers, the senior aviator on site, replacing a mechanic on the flight at the last minute.

The flight proceeded normally until the seaplanes were a few miles from their destination, at which time a sudden gust of wind unexpectedly lifted the tail of the B-2 while it was at an altitude of about 1,600 feet. With the aircraft pitching forward in a 65 degree dive, Billingsley and Towers were both thrown forward, the young ensign losing his grip and hurtling through the air towards the water while Towers managed to grab part of the airplane and hold on until it hit the water. The fact that Towers survived was miraculous.

The crash made headlines across the country for it marked the first fatality in U.S. naval aviation. Though Billingsley’s death cast a pall over the Navy, it inspired a technical development that affected aviation. Amazingly not all aircraft of the day were equipped with a restraining strap for the pilot and when aviation manufacturer Glenn Curtiss arrived in Annapolis to visit Towers, who was recuperating from his injuries, they discussed the need for such equipment, the result being a buckled seat belt that became standard on both civilian and military aircraft. 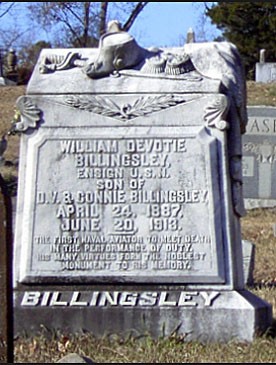 Lee recalled that around 2010 the Winona community started a drive to set up a Mississippi Archives and History marker for Billingsley in his hometown. The history marker was dedicated on October 24, 2011, with a ceremony that included a Navy flyover provided by NAS Meridian, Mississippi and included as guests the Commanding Officer of NAS Meridian and Mississippi Army National Guard general officers with a keynote speech by U.S. Senator Roger Wicker.

Following the marker dedication, the ceremony concluded at Oakwood Cemetery where student pilots from NAS Meridian laid a wreath on the grave of Billingsley, the ornate headstone featuring a carving that depicts the epaulettes and a fore and aft hat donated to the museum.