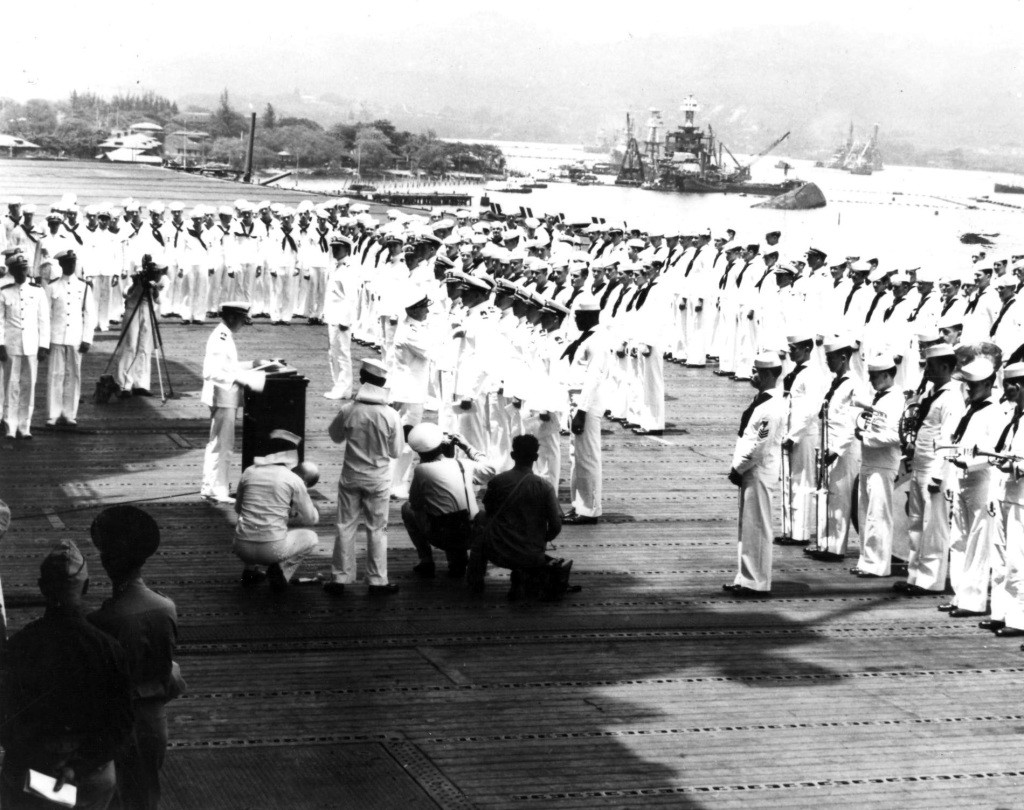 Admiral Chester W. Nimitz presents awards to naval personnel on the flight deck of the carrier Enterprise (CV 6) at Pearl Harbor on May 27, 1942.
Download

The photograph taken at Pearl Harbor on May 27, 1942, is filled with historical significance. There is the setting, the flight deck of the aircraft carrier Enterprise (CV 6), destined to be the most decorated ship of World War II, with the destruction wrought by Japanese aircraft on Battleship Row visible in the background. The superstructures of battlewagons and the cranes of salvage vessels rise over the hull of Oklahoma (BB 37), which capsized during the Pearl Harbor attack. The line of personnel in dress white uniforms receiving awards from Pacific Fleet commander Admiral Chester W. Nimitz is composed entirely of commissioned officers with one exception, his enlisted rank not the most noticeable difference. African-American Cook Third Class Doris Miller waits for the moment Nimitz he steps in front of the admiral to have the Navy Cross pinned on his uniform for actions on board West Virginia (BB 48). During the fateful morning of December 7, 1941, Miller braved enemy fire to assist the mortally wounded Captain of the ship by moving him to a place of more safety and then manned a machine gun and fired at the attacking aircraft.

The photograph is also striking because it represents a prelude to history. As Nimitz pinned the Distinguished Flying Cross on Lieutenant Roger W. Mehle for actions in a raid against the Marshall Islands on February 1, 1942, he told the young aviator, “I think you’ll have a chance to win yourself another medal in the next several days.” Of course, we now know that interceptions of Japanese coded messages had revealed a plan to strike Midway Atoll and draw out the Pacific Fleet’s remaining carriers. In fact, that very day, Nimitz promulgated OpPlan 29-42, which outlined his plan of response to the enemy movements. One of the actions was to send Enterprise and Hornet (CV 8) along with their escorts to sea the following day, May 28th, to be followed by Yorktown (CV 5), which after hasty repairs of Battle of Coral Sea damage had been completed, departed with her escorts on May 30th.

The men assembled on the deck in the photograph would play their own roles in what would come to be called the Battle of Midway. We can only guess the identities of the sailors assembled in ranks, but perhaps they manned antiaircraft guns or loaded bombs onto the TBD Devastators and SBD Dauntless dive bombers that launched to attack enemy carriers.

Lieutenant Mehle (standing second away from Miller) would find himself leading a section of F4F Wildcats of Fighting Squadron (VF) 6 positioning his aircraft to attack Japanese dive bombers approaching to attack Yorktown on June 4, 1942, only to have his guns malfunction. Standing to Mehle’s right, Lieutenant Commander C. Wade McClusky was destined to play a pivotal role in the outcome of the battle. As Commander, Enterprise Air Group, he led SBD Dauntless dive bombers of Bombing Squadron (VB) 6 and Scouting Squadron (VS) 6 in an attack against Japanese carriers on June 4th. Finding only empty ocean as he reached the reported position of the enemy force, he engaged in a further search and happened upon the Japanese destroyer Arashi making high speed. McClusky led his charges in following the tin can straight to the enemy fleet, and led them in a devastating bombing attack. Among those pilots was Lieutenant (junior grade) Norman “Dusty” Kleiss (standing to Miller’s right in the photograph), a pilot in VS-6, who would plant his bomb on the carrier Kaga, and in a later attack put another bomb into the enemy flattop Hiryu. Lieutenant (junior grade) Cleo J. Dobson, who in the photograph is receiving the Distinguished Flying Cross from Nimitz, would serve as the Assistant Landing Signal Officer on board Enterprise, helping bring planes aboard during the course of the battle.

Of course, they knew nothing of what was to come on that sunny day, their shadows stretching across planks of the “Big E.”