A new exhibit created on the occassion of the 50th anniversary of the opening of the National Naval Aviation Museum is a veritable scrapbook telling our story.

Golden anniversaries only come around once and, in the case of the National Naval Aviation Museum, this year marks that momentous milestone. While the museum was established with its mission outlined by the authority of the Secretary of the Navy in 1962, not until June 8, 1963, did it open its doors to the public for the first time. That fifty year story is told in a new exhibit that has opened on the museum Quarterdeck.The summer of 1963 was a monumental time in American history as the Civil Rights Movement swept across the South and American astronauts rocketed into space taking the early steps towards realizing President John F. Kennedy’s goal of reaching the moon. In popular culture a band called the Rolling Stones released its first single and moviegoers were first introduced to a spy fond of martinis shaken, not stirred. That year New York Yankees slugger Mickey Mantle made $100,000 dollars and Jack Nicklaus captured the first of his six Masters titles. 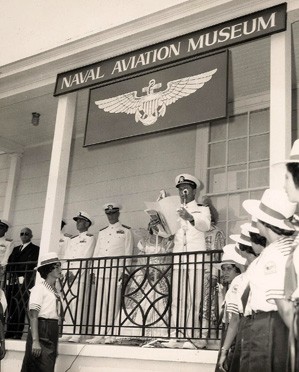 On June 8th, a crowd gathered around a white clapboard building that was a holdover from the World War II construction on board NAS Pensacola. Interspersed among the people were static displays of airplanes, the limited confines of the museum building having room for just a few flying machines. Flight students dressed in white marched in precise formation, the education of these young men in the history and heritage of naval aviation one of the prime motivating factors for the senior officers who first envisioned a museum eight years earlier. Rear Admiral Magruder H. Tuttle, USN, one of the driving forces in the effort, was about see the realization of that vision as he ascended the front steps of the structure on which hung signs painted with naval aviators’ wings of gold and the words “Naval Aviation Museum.” At 1025 actor and Naval Reserve Lieutenant Commander Jackie Cooper, the master of ceremonies, began the formal program, among those standing behind him the costumed Don Tristan De Luna and his queen given the fact that the opening of the museum was one of the many events that was part of the day’s Fiesta of Five Flags open house on board the air station. After a speech by Vice Admiral William A. Shoech, the Deputy Chief of Naval Operation (Air), the proverbial ribbon cutting ended the ceremony. All told, it had taken just twenty minutes.

To be sure momentous times followed as historic aircraft made their way to the “Cradle of Naval Aviation” for rework and eventual display and veterans and their families began donating artifacts from long-forgotten footlockers. Established in 1966, the Naval Aviation Museum Association (later Naval Aviation Museum Foundation) moved forward with capital campaigns that resulted in the eventual construction and expansion of a new museum complex adjacent to Forrest Sherman Field. We have never looked back, the National Naval Aviation Museum now one of the largest and most recognizable institutions of its kind anywhere in the world. 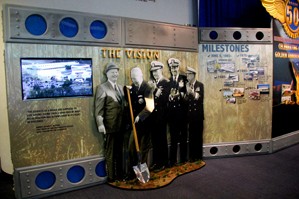 Positioned at the entrance to the Laser Powered Giant Screen Digital Theater, the new exhibit is a veritable life-sized scrapbook of the museum, one of the dominant images being cutouts of individuals taken from a color photograph of the groundbreaking for new construction on what is now the south wing. The cutout image of Admiral Arthur W. Radford, USN, the former Chairman of the Joint Chiefs of Staff and first head of the Naval Aviation Museum Foundation, holds the actual shovel used for the event. Two films produced by museum staff complement the visual display. The first incorporates a clip of the opening day ceremony on June 8, 1963, old footage from local television newscasts and other imagery to document the various phases of construction of the museum. A second film focuses on the aircraft collection and how it evolved from flying machines whose rust and peeling paint masked former glories to the acclaimed collection of today. An interesting component of this film is a time lapse sequence showing how museum staff members maneuvered the giant PB2Y Coronado into the museum building!

The opening of this exhibit is part of a year-long celebration of our 50th birthday. On June 22nd, it will serve as the backdrop for a 50th Anniversary Kick-Off complete with gift giveaways and the cutting of a birthday cake. A symposium and formal black tie event are planned for October 5th.