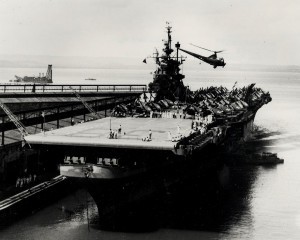 An HOS helicopter flies over the aircraft carrier Shangri-La (CV 38) in the late 1940s.
Download

Traditionally, the Navy has named its aircraft carriers after famous warships in naval history (Enterprise and Hornet), battles (Lexington and Saratoga), and people (Nimitz and Ronald Reagan).  There have been some exceptions, notably America, but in that name there was a connection to the nation the ship served.  One flattop broke the mold when it came to carrier names, its origins not the annals of naval history, the pen of a British novelist and the subterfuge of President Franklin D. Roosevelt.

On April 18, 1942, sixteen Army Air Forces B-25 Mitchell medium bombers under the command of Lieutenant Colonel James H. Doolittle launched from the aircraft carrier Hornet (CV 8) to attack the Japanese Home Islands, a highly-secret and unconventional operation that provided American morale a much needed boost.  When asked by the press about the location from which the bombers launched, Roosevelt replied “Shangri-La” in reference to a mythical Himalayan kingdom created by James Hilton in his novel Lost Horizon published in 1933, the same years Roosevelt took office.

The ship from which the Doolittle Raiders actually launched continued in service until October 1942, when she was sunk at the Battle of Santa Cruz.  Honoring her service, the Navy christened a new carrier Hornet (CV 12), which was placed in commission in November 1943.  Subsequently, on February 24, 1944, Mrs. James H. Doolittle slammed a bottle of champagne against the hull of another flattop at the Norfolk Navy Yard, christening her Shangri-La.  On September 15, 1944, with work having been completed, the carrier was commissioned and headed to the Pacific, spending much of the year 1945 steaming with the Pacific Fleet in the final campaigns against Japan.  Interestingly, she launched planes to attack Tokyo, just as the Doolittle Raiders had done, and joined other U.S. Navy ships entering Tokyo Bay for the surrender ending World War II.  For the ensuing quarter century, in between various periods in decommissioned status for modernization, Shangri-La served as both an attack carrier and antisubmarine warfare carrier and supported the atomic bomb tests at Bikini Atoll in 1946.  Aircraft from her deck also waged war again, flying combat missions over Vietnam in 1970, the carrier’s last cruise before her final decommissioning.  Since that time, no Navy ship has received the name Shangri-La.

A carrier was not the only thing connected to Roosevelt to borrow from the pages of Lost Horizon.  In 1942, he ordered the conversion of a former Works Progress Administration camp located in the Cacotin Mountains near Thurmont, Maryland, into a Presidential retreat, his interest in the project including details on the design of structures and even the drill schedules of Marines stationed there.  The following year, he hosted British Prime Minister Winston Churchill at the site, which Roosevelt christened Shangri-La.  It would continue to be known by that name until President Dwight D. Eisenhower changed it to honor his grandson.  From that point until today, it has been known as Camp David.