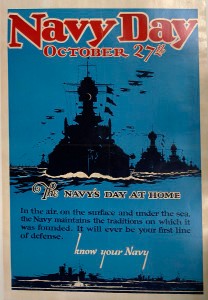 In 1922, fifty years before Chief of Naval Operations Admiral Elmo Zumwalt authorized recognition of October 13th as the official birthday of the U.S. Navy, the Navy League of the United States sought to designate a day to celebrate the Navy. It chose October 27th, the birthday of former President Theodore Roosevelt. It was a fitting choice for up until that time there had been no greater proponent for the Navy, which he once said was “the right arm of the United States and is emphatically the peacemaker.” A student of naval history—he published his definitive history of the naval war of 1812 when he was just twenty-three years old—Roosevelt eventually served as Assistant Secretary of the Navy. As President, he famously dispatched the Great White Fleet, so named because the warships were painted a brilliant white to draw maximum attention, on an around-the-world cruise as a show of American naval might and many times ordered American warships to trouble spots when it was in the national interest. 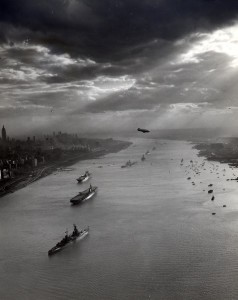 Tugboats and U.S. Navy warships pictured in the Hudson River with the New York City skyline in the background on the occassion of Navy Day on October 27, 1945. Visible in the foreground are the anchored heavy cruisers Augusta (CA 31), Helena (CA 75), and Macon (CA 132); carriers Midway (CVB 41) and Enterprise (CV 6); and battleships Missouri (BB 63) and New York (BB 34).
Download

Navy Day was formally observed from 1922 until 1949, the first occurrence described by a New York City reporter. “Warships in the river, the brasses of each like gold, their coats of grey tint like satin robes, and a thousand school boys in khaki at a grave in Oyster Bay [Theodore Roosevelt’s final resting place], sketched in two scenes…the double holiday the metropolis celebrated today.” Subsequent Navy Day celebrations included a flight of the rigid airship Los Angeles (ZR 3), which stretched to a length of over 650 ft., over Washington D.C. in 1930, and port visits by Navy warships. Perhaps the grandest commemoration of all came on October 27, 1945, the first Navy Day following the end of World War II. A parade of ships that included the venerable carrier Enterprise (CV 6) and battleship Missouri (BB 63) were part of a presidential review in the Hudson River in the shadows of New York City’s skyline.

The legacy of the man who inspired Navy Day endures. One of the ships that his successors in the White House can order to respond to a crisis anywhere in the world is an aircraft carrier that bears his name. Additionally, in the more than century old history of naval aviation, the first significant event that occurred was a March 25, 1898, recommendation for the assignment of Army and Navy officers to investigate the applications of a flying machine developed by Samuel Langley for naval and military purposes. The idea was that of a young Assistant Secretary of the Navy named Theodore Roosevelt.