The United States had been at war for just over seven months when a PBY-5B rolled off the Consolidated Aircraft Corporation assembly line. One of 225 of its type built for eventual delivery to Great Britain under the provisions of Lend-Lease, the career of this particular Catalina flying boat was destined to take a couple of unlikely turns, one of which preserved it for future generations after most of its contemporaries faded into history.

The first of these events was the inclusion of the airplane in a batch of 60 PBY-5Bs that were shifted from the Lend-Lease contract to U.S. Navy service, a move which took the airplane, its FP-216 identification number still painted on the tail in lieu of a U.S. Navy bureau number, not across the Atlantic, but to the Florida Gulf Coast. “Smoothness, precision and coordination are hammered into the embryonic aviator,” the 1943 edition of the Flight Jacket cadet yearbook at Naval Air Station (NAS) Pensacola described flying boat training. “Just how well the cadet ‘gets the word’ on watching two throttles, controlling propeller pitch, air speed and smelling wind direction and velocity from the choppy water is determined by his final check.” The platform for the training described was the PBY Catlina and thus FP-216 began making flights from the shores of Pensacola with VN-8D8A (Training Squadron (VN) 8A, Eighth Naval District). On May 28, 1944, as Allied forces assembled overseas for the upcoming invasion of Normandy, flight operations on board NAS Pensacola proceeded at their frenetic wartime paces, the skies buzzing with the sounds of training planes in flight. Ensign Motter C. Pennypacker, Jr., nearing completion of his first year as a flight instructor with VN-8D8A, manned FP-216 along with five others for a training flight. Everything proceeded normally until the plane water looped while making a landing, which caused severe structural damage to the plane and fortunately only resulted in minor injuries to one of the men on board. Eventually towed ashore, the grounded Catalina, if to add insult to injury, was involved in a ground collision with another aircraft being towed along the seawall.

At the time of these incidents involving FP-216, the Survival Training Unit at NAS Pensacola, which during the war was involved in teaching flight students the skills and techniques they would require if forced down on land or at sea, was developing an exhibit to create a hands-on environment for instruction. One such teaching aid was already in place in the form of an SO3C Seagull aircraft positioned in a nosed-over crash position complete with a pilot mannequin with its head slammed against the instrument panel, a reminder to buckle shoulder straps. A group of junior officers, among them Lieutenant Jim Morrison, who later would spearhead fundraising to restore the airplane, came up with the idea of using FP-216. With PBYs then the primary platforms for air-sea rescue, the idea was to expose students to the interior layout of the airplane completely fitted out with survival gear. With some assistance from the Assembly & Repair Division, the wing and skin on the port side of the plane was removed and the grounded PBY was placed into the back wall of the building housing classrooms and exhibits. Interestingly, a period photograph shows an aircraft at the building that has FP-192 visible on the tail section of the airplane. However, in later years the tail section was removed and a data plate inside the cockpit of the fuselage clearly identified the hull as that of FP-216. FP-216 remained in place until 1997, a popular exhibit for flight students as well as civilian visitors. That year, in the wake of the decision to close the Survival Training Exhibit, a team from the museum ripped the airplane out of the wall and placed it in storage. Not until 2001 was it moved to the museum’s restoration facility where it received corrosion control, metalwork, and painting. While this process was underway, volunteers and staff refurbished equipment removed from the aircraft while members of the PBY Catalina International Association scoured the world for parts to complete the interior, their efforts resulting in the current display of the airplane that fully depicts the interior of one of the venerable flying boats in its wartime configuration. 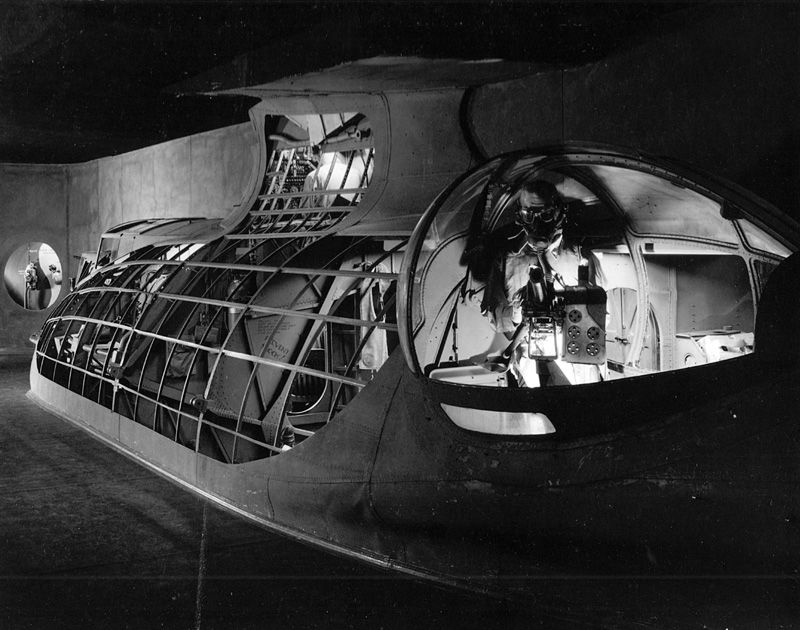 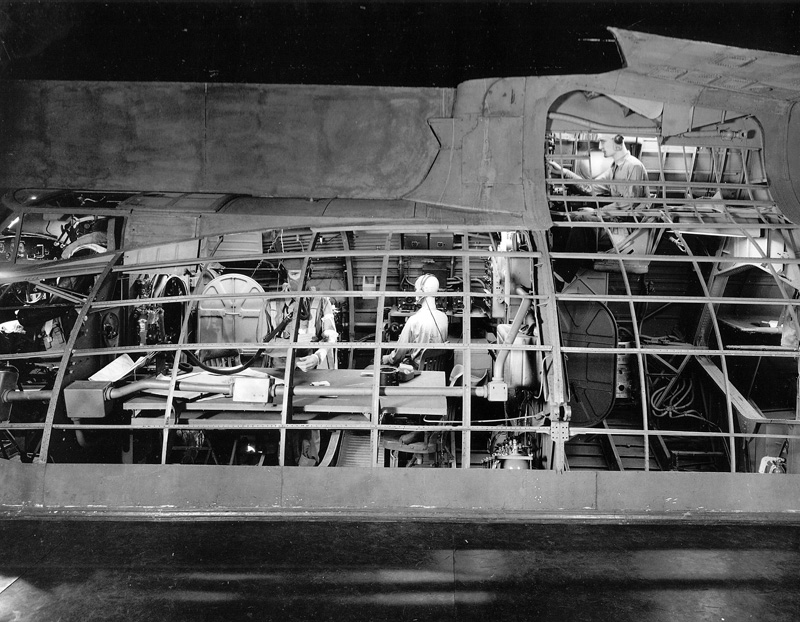