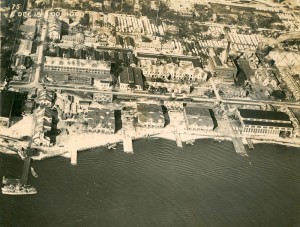 This photograph taken just weeks after the end of World War I shows camouflaged buildings on board NAS Pensacola.
Download

When news came announcing the declaration of war against the Central Powers and entry of the United States into World War I, there was a very real fear in the United States that the country could be the subject of attack and, owing to the sizeable German-American population, ripe for infiltration by German spies. “The military masters of Germany have filled our unsuspecting communities with vicious spies and conspirators,” proclaimed President Woodrow Wilson in a June 1917 speech, “and have sought to corrupt the opinion of our people.”

The experience in Pensacola, like in many areas, reflected these concerns as evidenced by the immediate seizure of two German steamers moored at the city’s port, their crews taken ashore and held in custody by U.S. Marshals. On board Naval Aeronautic Station Pensacola, naval officers sent to the Florida panhandle to fly found themselves returning to the seagoing traditions of their service. Just a week after the declaration of war, Lieutenant Frank Simpson, Jr., wrote of being assigned to command a small steam craft that patrolled the coastal waters off Pensacola to search for German U-boats and identify vessels approaching the entrance to Pensacola Bay. His tenure as skipper was uneventful, with most of the excitement coming more from fishing than any contact with the Hun. 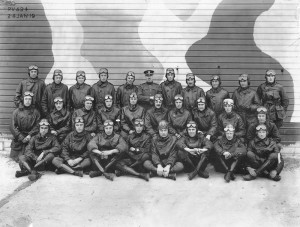 With most of them bedecked in leather flight gear, aviators at NAS Pensacola assemble in front of a camouflaged building on January 24, 1919.
Download

In a letter home to his parents, flight student Wayne Duffett wrote that “secret service men caught a spy in camp last night and you cannot turn around this place now, but a guard asks you where you are bound. This fellow had complete maps of all buildings, roads, etc., the bay, and in fact everything including number of personnel and officers. This fellow enlisted as a sailor and used to keep all the records between the sheets and mattress of his cot.”

The wartime growth of the aeronautic station certainly made it a tempting target. Between April 1917 and November 1918, over 100 structures were added to the station infrastructure to meet the training demands of not only aviators, but also mechanics, gunners, and other enlisted specialties. It was a change to the appearance of these structures that became the most visible evidence of the wartime footing of Pensacola. Sometime during the war, hundreds of gallons of paint arrived and personnel set to work slapping camouflage paint on most buildings on board the base, from the stately commandant’s house to the floating blimp hangar built to house the Navy’s first airship, the DN-1. When completed, the appearance of the aeronautic station, so varied before with the late-nineteenth century buildings coexisting with newly fabricated aircraft hangars, was uniform. It would remain so even after the war, the camouflage paint still visible in photographs into the early 1920s.