posted in FROM THE COCKPIT: STORIES OF NAVAL AVIATION on June 28, 2013 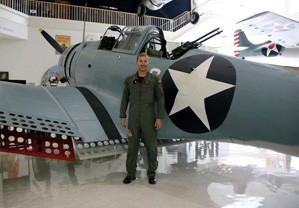 Lieutenant Tyler Hurst flies F/A-18E Super Hornets and is on his way to Test Pilot School, but it was a special opportunity to follow in the footsteps of his grandfather at the museum.

Lieutenant Tyler Hurst remembers seeing the photographs on the wall of his grandfather’s house during visits as a child. The images of the aircraft carriers charted the service of naval aviator Captain Charles E. Roemer from his first flattop, Lexington (CV 2), from which he abandoned ship during the Battle of Coral Sea, to the aircraft carrier named for that landmark engagement, Coral Sea (CVA 43), which Roemer commanded during the early 1960s. These images and a family legacy inspired the boy from Bakersfield, California, to a career in the sea service.

Following graduation from the U.S. Naval Academy in 2004, he entered the flight training program, receiving his wings of gold in 2006. After service as an instructor in the T-45 Goshawk, it was off to Naval Air Station (NAS) Lemoore, California, for transition to the F/A-18E Super Hornet. Assigned to Strike Fighter Squadron (VFA) 147, Hurst completed deployments on board the carriers John C. Stennis (CVN 74) and Ronald Reagan (CVN 76), supporting Operation Enduring Freedom and Operation New Dawn. 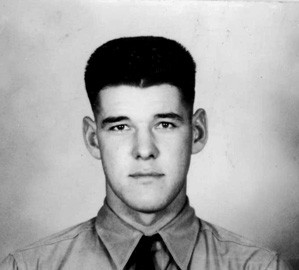 Now about to embark on the next stage of his career at the U.S. Navy Test Pilot School, Hurst recently visited the National Naval Aviation Museum to experience firsthand a tangible link to the service of his grandfather, who received his own wings of gold on July 14, 1938. Upon graduation he was assigned to Scouting Squadron (VS) 2 on board Lexington, where he joined one of his flight school classmates, Mark Whittier, who had received orders to Bombing Squadron (VB) 2. In December 1940, a new SBD-2 Dauntless arrived from the Douglas Aircraft Company in El Segundo, California, its bureau number (2106) appearing in Whittier’s log book numerous times, including a March 10, 1942, combat mission against Japanese shipping at New Guinea for which he received the Navy Cross. With the airplane not assigned to his squadron, Roemer likely never flew it during his time on board Lexington, but he perhaps waved its pilots aboard while he served as a landing signal officer.

Flash forward more than half a century to 1994 when Bureau Number 2106 emerged from the waters of Lake Michigan, part of a National Naval Aviation Museum program that recovered airplanes from the lake’s waters where they crashed during carrier qualification. One of the first people museum staff members contacted after researching the airplane’s history was retired Captain Mark Whittier, who closely followed its restoration and was on hand when his old Dauntless was placed on display. During the course of the restoration, Whittier told his old classmate about the airplane’s discovery, and Captain Roemer dutifully checked his log book for the bureau number. What he found prompted the visit of his grandson. 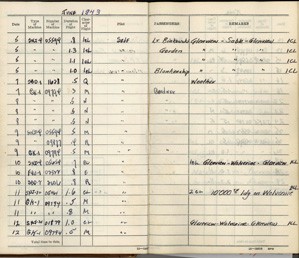 After Lexington’s sinking in May 1942, Roemer’s next set of orders was to the Great Lakes, where he was assigned as a landing signal officer on board the training aircraft carriers Wolverine (IX 64) and Sable (IX 81). In this capacity he had the opportunity to fly many of the aircraft that were assigned to the Carrier Qualification Training Unit (CQTU) at Naval Air Station (NAS) Glenview, Illinois. On June 10, 1943, he recorded a .8 hour test hop in Bureau Number 2106, one of three flights he made that day, which included a carrier landing and launch on board Wolverine and a familiarization flight in an F4U-1 Corsair. The following day, he was in the air again multiple times, a standard pattern in his log book during that time. On one of them he recorded the 10,000th landing on board Wolverine.

That same June 11, 1943, Marine 2nd Lieutenant Donald A. Douglas, Jr., took off from NAS Glenview in Bureau Number 2106 to attempt to carrier qualify. During an approach to Sable, he took a wave off from the landing signal officer and as he banked left to clear the ship, the airplane’s engine sputtered and then caught. Combined with the fact that Douglas was flying low and slow, it was enough to cause the plane to lose altitude and crash into the water. The young aviator was retrieved from the water by a Coast Guard rescue boat, but the aircraft sank to the bottom.

With an old wartime flight log book in hand, Lieutenant Hurst spent some quality time with the historic Dauntless, which also flew at the Battle of Midway, during his visit. He walked around it and climbed on the wing just like his grandfather did when he did a pre-flight inspection of the airplane and manned up back in World War II, history coming alive for a few special moments.