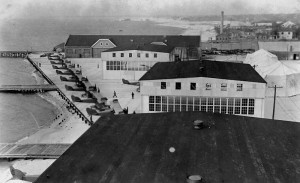 Trainers pictured lined up in front of newly constructed hangars, some of the canvas tents they replaced visible behind them in a photograph taken during 1916-1917.
Download

On December 12, 1914, while winter weather caused temperatures to dip into the twenties in Washington D.C., Captain Mark Bristol, the Director of Naval Aviation, penned a letter to Lieutenant Kenneth Whiting, who in the absence of more senior officers, was serving as officer-in-charge at Naval Aeronautic Station Pensacola. The climate was certainly warmer in the Florida panhandle, one of the reasons that Pensacola had been selected for its role in aviation training, but the infrastructure remained sorely lacking, particularly in the housing of the Navy’s assortment of airplanes. Bristol’s letter, in part, proposed changing that.

“My present idea is to have hangars 75 feet wide with a 60 foot street between them…I have under consideration making the building two stories, with sleeping quarters in the upper story for the men attached to the hangar. On the ground floor at this end would be an office for officers, a storeroom and a workshop of small capacity for emergency repairs on the machines. The rest of the hangar would be one story, with a sort of platform over the machines, where packing boxes and spare parts of the machines required in the hangar could be stored. “

It would not be until 1916 that the permanent hangars envisioned by Bristol began to take shape along the waters of Pensacola Bay. Contrasting with the brick buildings around them, the hangars were made of metal, the first three costing $39,914.59 apiece. Each of these measured 102×72 feet, though they were later expanded to measure 102×148 feet. Constructed between 1916 and 1918, they were part of a wartime building plan that eventually resulted in seven hangars lining the seawall on board the air station. They were a timely addition to the station, especially given the fact that during World War I the number of seaplanes operating from Pensacola increased from 39 to 215. 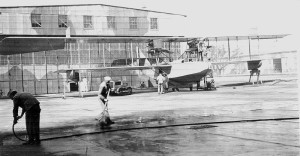 A newly constructed hangar serves as the backdrop for an H-12/H-16 flying boat at NAS Pensacola. Note the sailor manning a broom in the foreground.
Download

For over three decades, during which the waterfront buzzed with activity as seaplanes splashed into the water for training flights, these hangars were at the center of Pensacola’s operations. The twilight of seaplane operations in the Navy caused the hangars to be employed for other purposes, notably as part of the Naval Air Rework Facility repairing aircraft.

Today, only one of the original Great War hangars remains standing, its days of service living only in memory reflected in the words of one aviator, who in a letter home spoke of walking along the seawall and peering at the aircraft inside hangars. “I could not but think that with closed eyes, but not asleep, they were meditating upon the things they had seen and felt, thinking of their days high in the sun with smooth blue water way beneath and cloudless skies above. Or perhaps they thought of the dark days with eddying air, days when they tossed about through dark clouds with the center of squall booming over the horizon… It is not impossible that they meditated upon strange intangible things yet to come. Ominous things of the air that men, dull in such things, would not even know were they close at their elbows.”