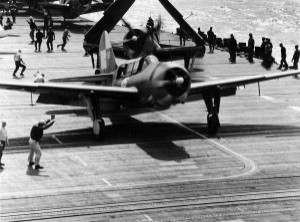 An SB2C Helldiver of Bombing Squadron (VB) 17 pictured ready for launch from the carrier Hornet (CV 12) to carry out strikes against Japan in February 1945.
Download

Ironically, when the first aircraft launched from the deck of an aircraft carrier to bomb the Japanese Home Islands, there was not one naval aviator on board any of the aircraft. Instead, Army Air Forces personnel under the command of Lieutenant Colonel Jimmy Doolittle manned sixteen B-25 Mitchell bombers, taking off from the deck of Hornet (CV 8) on April 16, 1942, to raid targets in Tokyo and the surrounding area. After the launching of the Doolittle Raiders, Hornet and Enterprise (CV 6), which accompanied her into the waters off Japan, turned east and headed back to Pearl Harbor. It would take nearly three years for the keels of U.S. Navy flattops to enter those waters again.

On February 16, 1945, Vice Admiral Marc A. Mitscher, who had commanded Hornet on that momentous April day in 1942, led Task Force 58 into Japanese waters to launch the first strikes by U.S. Navy carrier-based aircraft against Japan. With Marines preparing to go ashore on the island of Iwo Jima on February 19th, the strikes were intended to neutralize Japanese air power that might attempt to interfere with the landings. Yet, for the personnel on board the task force’s carriers, particularly those who had been in uniform during the dark days of 1942 when a handful of U.S. Navy flattops held the line, striking Japan held a special meaning.

In a message posted in all squadron ready rooms, Mitscher wrote, “The coming raid on Tokyo will produce the greatest air victory of the war for carrier aviation…The enemy will be forced to come up to protect the capital of his empire. He will be aggressive and eager to display his ability to his people on the ground. In his eagerness and inexperience will he meet his downfall.” Following this statement came tactical guidance on everything from teamwork in air-to-air combat to the proper diving angles for strafing attacks. The plan of action called for mass fighter sweeps against enemy airfields followed by bombing and torpedo attacks to inflict more permanent damage on a variety of targets.

The morning of February 16th found Task Force 58 just sixty miles off the Japanese coast, the cloudy and cold weather conditions contrasting to the more tropical climes in which the aviators and aircrewmen were accustomed to flying. An Associated Press reporter captured the first day of raids in stirring prose, writing “Screaming Hellcats, their heavy multiple machine guns spewing death and destruction in the first American carrier sweep over Tokyo, jarred the Japanese capital shortly after dawn.” Japanese gunners below peppered the skies with antiaircraft fire, one section of road between Tokyo and Yokohama called “flak highway” by naval aircrews. All told, more than eighty carrier aircraft were lost to enemy fire during two days of operations on February 16-17 1945., a total certainly eclipsed on the Japanese side when air-to-air kills were combined with enemy aircraft destroyed on the ground.

Yet, a fact that could not be ignored was the inability of the Japanese to prevent a large naval force from operating off their shores with impunity. “You can imagine how tremendously thrilled we are tonight,” the skipper of the carrier Hornet (CV 12) wrote his wife on February 17th. “We always knew [we] could walk right up to Tokio Bay…I even made a speech over the loudspeaking system! I know how pleased you and the kids are over the communiqué from Admiral Nimitz that ‘Admiral Mitscher’s carriers have hit Tokio.’ Are people back home as pleased as we are?” With America one step closer to victory, they most certainly were.