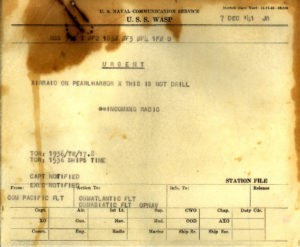 The famous message that announced the Japanese attack on Pearl Harbor.
Download

For military personnel stationed at Pearl Harbor on the morning of December 7, 1941, the first thought upon seeing aircraft flying at high speed and low altitude was that some cocky aviator was flat-hatting, showing off for those on the ground. However, the muzzle flashes from machine guns winking on the wings of the airplanes and detonations of bombs and torpedoes against ships in the harbor quickly dispelled this notion. Upon those peering skyward and realizing that Pearl Harbor was under attack was Lieutenant Commander Logan C. Ramsey, who quickly ordered the transmission of a flash message that reverberated around the Navy and the nation. “AIRRAID ON PEARLHARBOR X THIS IS NOT DRILL”

Perhaps more than any other officer present, Ramsey had the least reason to be taken aback by the events of that morning. Like many naval aviators of his generation, he had spent the interwar years espousing the tremendous combat potential of air power. Even before reporting to flight school at NAS Pensacola, where he earned his wings as Naval Aviator Number 2977, he had served as an ensign on board the battleship Texas during winter maneuvers at Guantanamo Bay, Cuba, in 1919. Texas was among the battlewagons chosen to serve as a platform experimenting with launching surplus World War I airplanes, among them the Sopwith Camel, to evaluate the performance of wheeled aircraft in comparison with seaplanes to perform long-range spotting and other operations in support of a fleet engagement. The superior performance of wheeled aircraft and the desire to employ them at sea led to the decision to convert a collier to the U.S. Navy’s first aircraft carrier, Langley, which was placed in commission in March 1922. 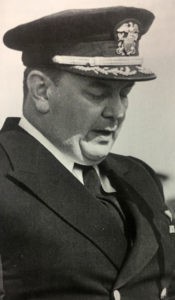 Captain Logan C. Ramsey, who as a lieutenant commander was on duty at Pearl Harbor when the Japanese attacked.
Download

In the cockpit, Ramsey made his first arrested landings on Langley and also flew from the carriers that followed, forming opinions about the potential employment of carrier aviation that he often shared in the U.S. Naval Institute’s Proceedings magazine, a forum for active duty personnel. One of the articles he submitted appeared in the August 1937, issue and pointed to what he believed was an overlooked application of carrier air power, the attack against a fleet not on the high seas, but in port. “Naturally, with the fleet in port, no major operations may be undertaken against the enemy, which in turn permits him to assume a certain strategical freedom of movement,” Ramsey contended. “Further, the attack itself would occur at his chosen moment rather than at a more indeterminate instant such as might be expected as a result of unanticipated contacts at sea.” He left little doubt as to the foremost purpose of such a daring raid. “Any transoceanic aerial raid would be undertaken, not with the purpose of destroying our cities or aircraft factories, but in the hope and expectation of inflicting damage upon our fleet while it is in port.”
The article was titled “Aerial Attacks on Fleets at Anchor,” its words foretelling the events that transpired just over four years later, when Japanese aircraft sought to deliver a crippling blow to the U.S. Pacific Fleet on the date that for three quarters of a century has lived in infamy.