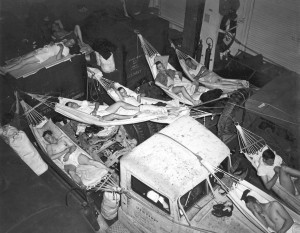 Returning personnel relax in hammocks on the hangar deck of the carrier Wasp (CV 18) during Operation Magic Carpet.
Download

In December 1945, newspapers that just one year before had brought news of the bitter fighting in the Ardennes, the famed Battle of the Bulge, printed the best Christmas gifts those on the home front could receive. “Cpl. James H. Mason, son of Mrs. Mary J. Mason… is on his way home,” read the hometown paper in Sikeston, Missouri. Similar announcements appeared all across America that holiday season and beyond, each including mention of a mass seagoing effort returning servicemen home from distant overseas locations. As with all things military, the operation had a name—Magic Carpet.

An effort of this magnitude did not materialize overnight. As early as 1943, as transports filled with GIs plowed across the Atlantic and Pacific towards the battle fronts, the War Shipping Administration and the Pentagon began planning for their eventual return. Just a month after V-E Day on May 8, 1945, Army transports and merchant marine vessels inaugurated the first voyages, eventually carrying some 430,000 personnel per month. The sudden end to the war in the Pacific after the atomic bombings of Hiroshima and Nagasaki—planners foreshadowed the war lasting into at least 1947 with an invasion of Japan—freed up U.S. Navy warships for Magic Carpet duty.

With their vast open hangar decks, aircraft carriers proved ideal for transport duties, though vessel of all shapes and sizes from battleships to modified LSTs (landing ship tank) participated. Among the former were two battlewagons that had been moored at Pearl Harbor on the fateful morning of December 7, 1941, Maryland (BB 46) and West Virginia (BB 48). The carriers were young and old, with the battle-scarred Saratoga (CV 3) and Enterprise (CV 6) joined by Lake Champlain (CV 39), which just months after her commissioning in June 1945, began transporting passengers rather than launching aircraft in combat, the latter having to wait until the Korean War. 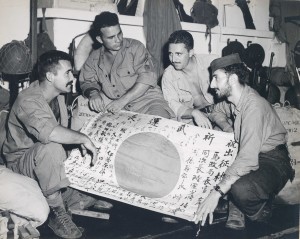 Glen Earl Bassett, a crewman on board Monterey (CVL 26), recalled that in October 1945, workers at the Brooklyn Navy Yard “modified the carrier by putting bunks on the hangar deck five high, and then put a steel top on it where they [returning servicemen] stowed their gear.” With not much activity to pass the time en route home, Monterey’s passengers passed the time trading war souvenirs and seeking ways around the ban on gambling. In the latter endeavor, Bassett remembered that one of his fellow crewmen saw a business opportunity, taking 10% of the pot for providing access to storerooms in the lower part of the ship that were away from prying eyes.

Some passages proved quick, with Lake Champlain establishing a record by crossing the Atlantic on a trip between Africa and the United States in 4 days, 8 hours, and 51 minutes. However, whether time at sea was short or long, the sheer volume of the transport effort was overwhelming. For example, in a span of just three days over Christmas in 1945, the Magic Carpet fleet delivered 45,000 soldiers and Marines to ports in California and Washington State. By January 3, 1946, the operation had returned its 2 millionth serviceman from the Pacific, Army Staff Sergeant Irving Feldman, who as a member of the 775th Tank Battalion had fought in the Philippines. He joined the millions whose homecoming was made possible by a Magic Carpet ride seven decades ago.