posted in FROM THE COCKPIT: STORIES OF NAVAL AVIATION on August 07, 2012

In the 100 years of Marine Corps Aviation, a time filled with momentous happenings and accomplishments, there is one that can be considered its defining moment.

In the annals of American history, there are a host of signature battles, people, and other events that epitomize the proud service of the Marine Corps. Iwo Jima, Chosin, Chesty Puller, and landing craft roaring towards a beachhead all kindle memories of the service of leathernecks.’ 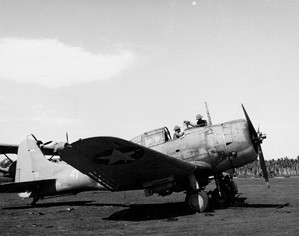 Of the 236 years that there has been a Marine Corps, exactly one hundred of them have included aviation, Marine First Lieutenant Alfred Cunningham having reported for flight instruction in 1912. And over the course of that century, one filled with accomplishments, perhaps the most defining moment for Marine Corps aviation came in a campaign that commenced on August 7, 1942, when members of the First Marine Division went ashore on Guadalcanal in the Solomon Islands.

Although Marine Corps aircraft were not on the scene on that day, that aviation was central to the operation was proven by the fact that the decision to make the first Allied offensive action at that location was the fact that the Japanese were constructing an airfield on Guadalcanal, one that threatened the line of communication with Australia. That airfield, which when captured was named Henderson Field after Marine Scout Bombing Squadron (VMSB) 241 commanding officer Major Lofton Henderson, who had been killed at the Battle of Midway in June 1942, became one of the focal points of the entire campaign. The airstrip was the object of concentrated assaults by Japanese ground forces, repeated bombardments by enemy ships, and numerous air attacks by Japanese airplanes.

Though Navy, Army Air Forces, and foreign forces joined them in flying from the airfield, it was Marine pilots and aircrewmen who were most identified with the operations of the so-called Cactus Air Force, the name derived from the Allied codename for the island of Guadalcanal. After the first Marine aircraft landed on the island on August 20, 1942, they compiled an incredible record of accomplishment. 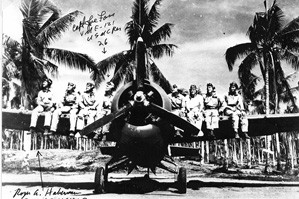 Between August 1942 and February 1943, when the island was declared secure, five Marine aviators performed actions for which they received the Medal of Honor. They included Majors John L. Smith, Robert E. Galer, and Harold W. Bauer, Captain Joe Foss, and First Lieutenant Jefferson DeBlanc. In addition to them, a host of Marines received the Navy Cross for their action, including acclaimed fighter ace Captain Marion Carl and Major Jack Cram, the latter the personal pilot for Brigadier General Roy Geiger. On October 15, 1942, when enemy ships threatened Guadalcanal, Cram jumped into Geiger’s assigned PBY Catalina, using the lumbering flying boat to make a torpedo attack against a Japanese transport.

With the Battles of the Eastern Solomons and Santa Cruz reducing the number of aircraft carriers operating in the waters of Guadalcanal, landbased aviation proved pivotal in defense of Guadalcanal, from thwarting repeated attempts by Japanese ships to land significant reinforcements on the island to providing long-range scouting and close air support.

Nowhere in World War II would Marine aviation personnel operate under such conditions of personal hardship as they did during the Guadalcanal campaign. Living conditions on the tropical island were abysmal and airmen took to the skies while suffering the effects of such tropical diseases as dysentery. Additionally, supplies were sometimes scarce, meaning reduced rations on which to subsist. Thus the derisive nickname for the campaign among those who served on Guadalcanal- Operation Shoestring.

While the Battle of Midway blunted the Japanese string of conquest and offensive actions that began with the surprise attack on Pearl Harbor, it was the protracted campaign for Guadalcanal that proved the turning point of the Pacific War, the flying leathernecks a key contributor to the attrition of experienced Japanese aircrews that occurred in its embattled skies.

Guadalcanal demonstrated the combined arms doctrine of the Marine Corps, subsequent amphibious assaults following the pattern of seizing island airfields from which Marine aircraft could operate to support their fellow leathernecks on the ground.

Such was the importance placed on Guadalcanal that when the First Marine Division created a unit patch, the name of the island that was the scene of their first combat action was superimposed over the numeral one. Similarly, no Marine who fought the air war there, whether their service was limited to the war or they made a career of the Corps, what they endured there.