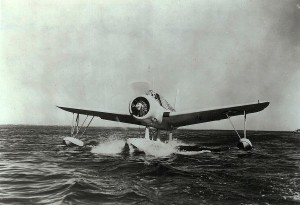 In nature, kingfishers are birds that dive into the water, catching fish in their pointed beak before soaring skyward.  When personnel at the Vought-Sikorsky Division of United Aircraft Corporation chose to bestow the nickname “Kingfisher” on their new observation scout aircraft that entered Navy service in 1940, it was fitting.  The float-equipped OS2U Kingfisher would be able to soar among the clouds and land on the water.  Though it would certainly not pluck fish from the water, the airplane on many occasions pulled a downed airman from danger after he had bailed out or ditched his aircraft, among them famed World War I fighter ace Eddie Rickenbacker when a plane in which he was traveling as a passenger ditched in the Pacific.  Yet, perhaps the most famous rescue involving an OS2U occurred in the waters off Truk in the Caroline Islands in April 1944.

Just mentioning the name Truk got the attention of naval aviators flying from Pacific Fleet aircraft carriers, the Japanese-held island fortress one of the most heavily defended targets thy faced during World War II.  On April 29, 1944, flattops under the command of Vice Admiral Marc Mitscher returned to Truk, having first attacked the base known as “Japan’s Pearl Harbor” in February.   Lieutenant (junior grade) Scott Scammell, II, and the crew of his TBF Avenger were among the first to experience the enemy defenses when an antiaircraft shell blew a hole in the left wing of the airplane, forcing them to ditch and scramble into a life raft.  Others met the same fate, either ditching or parachuting from their stricken airplanes.  Floating on the water, these downed airmen rigged sails and used sea anchors to get as far away from enemy shores as possible, saving what rations they could in the event they had to spend days at sea.

In the days before the advent of the helicopter, submarines were positioned in the waters off target areas to rescue downed airmen, future President of the United States George H.W. Bush one of the hundreds picked up in this manner.  During the April strikes on Truk, one of the submarines assigned this task was Tang (SS 306) under the command of Lieutenant Commander Richard O’Kane, who would later received the Medal of Honor.  Proceeding on the surface whenever possible, Tang was the sub that reached Scammell and his crew, taking them aboard with O’Kane asking members of his crew to save the raft as a souvenir for his kid back home.   An attempt to reach another pilot 30 miles away ended with nightfall.

The following day, April 30, 1944, Tang momentarily tracked a Japanese submarine escaping from Truk, the enemy vessel submerging to avoid U.S. Navy carrier aircraft before the American sub could attack.  When O’Kane brought his boat to the surface, he came upon an OS2U Kingfisher flown by Lieutenant (junior grade) John Burns. 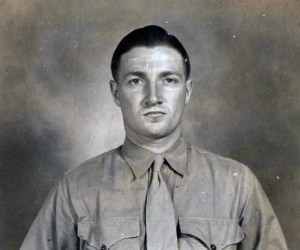 A native of Wynnewood, Pennsylvania, Burns had reported for flight training in January 1942, and received his wings later that year.  Though he had sought a commission in the Marine Corps, he instead was commissioned an ensign and assigned to Observation Squadron (VO) 6 on board the battleship North Carolina (BB 55).  Burns had joined another Kingfisher pilot, Lieutenant John J. Dowdle, Jr., searching for downed airman from the previous day’s air strikes.  Spotting a downed F6F pilot, Dowdle had landed his plane in an effort take him aboard.  However, while on the water, a gust of wind overturned his aircraft.  He and his radioman, Aviation Radioman Second Class Robert E. Hill, ended up in the water, which prompted Burns and his radioman, Aviation Radioman Second Class Aubrey J. Gill, to put their Kingfisher down in five foot seas.

When O’Kane first spotted Burns, the downed F6F pilot, along with Dowdle and Hill, were clinging to his aircraft.  Burns taxied over to Tang and off-loaded the rescued airmen before taking off again.  Once airborne, Burns spotted three more rafts and radioed their positions to the crew of Tang.  En route, the submarine received further reports of downed airman and maneuvered to rescue them, thus delaying their arrival at the position Burns reported.

Worried that Tang had not arrived and not wanting to leave his fellow airman adrift, Burns made the decision to land his OS2U Kingfisher, picking up F6F Hellcat pilot Lieutenant (junior grade) Robert T. Barbor and, with air strikes against Truk underway again, keeping an eye out for other downed airman. He didn’t have to wait long as first one and then another Avenger ditched, their crews escaping into their life rafts.   As Burns taxied over to their positions, Gill threw them a line in an attempt to tow the rafts, but this began to swamp them.  Undaunted, the men climbed onto Burns’ plane, positioning themselves on the wings and wherever there was room on the fuselage. 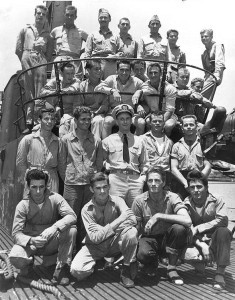 At this point Burns’ aircraft began to spring leaks due to the pounding of the waves against the main pontoon and the OS2U began to list to one side, threatening to capsize the plane.   Tang, which had been en route to Burn’s position hours earlier before being called away by reports of downed airmen, returned and hauled the men on the Kingfisher aboard.  After sending Burns and Gill below so they would not have to the witness it, O’Kane ordered the Kingfisher sunk by the sub’s deck gun.

For his actions, Burns later received the Navy Cross.  He, his crewman, and those rescued also received a taste of submarine warfare as temporary members of the crew of Tang as she continued her war patrol before returning to Pearl Harbor, a famous photograph taken upon her return showing the rescued personnel on the conning tower.  The following October, Tang was sunk during an attack against Japanese ships near Turnabout Island in the Western Pacific, the victim of an errant torpedo that she had fired at the enemy.  Only nine members of her crew, including Lieutenant Commander O’Kane survived the sinking and were captured by the Japanese.