In 1924, the Navy’s Bureau of Aeronautics mandated that parachutes be worn by all service personnel on all flights and they have been a staple of the survival equipment ever since. At the same time, the Navy recognized the need to build a knowledge base among its personnel in all aspects of parachute operations, including their care and operations, while at the same time developing a test program to ensure that the vital lifesaving equipment functioned properly when an in-flight emergency rose. Thus, on September 1, 1924, the Navy established a parachute school at Naval Air Station (NAS) Lakehurst, New Jersey. 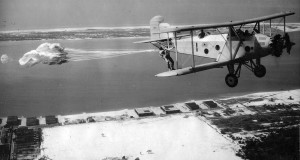 A sailor pictured just before making a parachute jump from the wing of a T4M aircraft over Naval Air Station (NAS) Pensacola, Florida, in 1926.
Download

When you want something done in the Navy, you go to a chief petty officer, and accordingly the Navy assigned a pair of chiefs, Alva F. Starr and Lyman H. Ford, to serve as the initial instructors. Upon arriving at Lakehurst, the pair welcomed the first class of 15 students, who assembled in an old unheated shed that served as the school’s first headquarters. Practice for the all-important packing of parachutes occurred on a single table covered with canvas that was given 4 coats of wing dope to make it smooth, lest any parachute canopy be inadvertently torn. For airborne tests, students climbed onto the lower wing of biplanes, grabbed onto a strut, and held on as the plane took off and climbed to the prescribed altitude from which the sailor jumped. By the 1930s, these jumps were made from airships that operated from NAS Lakehurst. Seizing upon the thrill and danger of the work, one newspaper called those who attended the school, “The Death Cheaters.” In the same article, Starr captured what it was like to jump from an airplane. “The dizzy fall, the roar of the wind slipping by your face, the hysterical suspense as you jerk the ripcord, the freezing of muscles and heart as you wait for the pilot chute…no man can forget that!”

Meanwhile, it did not take long for parachutes to demonstrate their value. On October 16, 1924, following a mid-air collision over Coronado, California, Gunner William M. Coles of Fighting Squadron (VF) 1 employed his parachute and successfully escaped his JN Jenny biplane, the first emergency use of the device in naval aviation. By October 1933, some 90 individuals in naval aviation had employed parachutes to save their lives in aviation mishaps, testament to the statement written for aviators of the era. “The parachute, to the service aviator, is as the lifeboat to the mariner in a case of shipwreck; treat it as such, and it will serve you well if needed.”

The Navy eventually recognized the important skill set of those who maintained parachutes. While those who reported to Lakehurst in 1924 and for years afterwards received training as a collateral duty, retaining their existing rates, in 1942 the Navy established the rate of Parachute Rigger. Today, the rate is called Aircrew Survival Equipmentman, the job requiring no only maintaining parachutes, but also the array of equipment that is part of the modern survival package for those who fly.