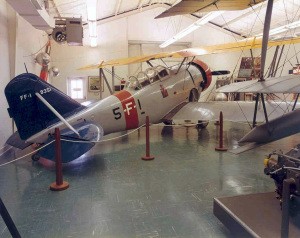 The FF-1 pictured on display at the original site of the Naval Aviation Museum.
Download

The museum’s “FF-1″ is actually an export version of the aircraft designated the G-23 built by Canadian Car & Foundry under rights acquired from Grumman Aircraft Engineering Corporation. It was the sole example purchased by the Nicaraguan government, one of three different aircraft procured to form the basis of that nation’s air force. After seeing limited service, it was relegated to a scrap yard at Zololtan Air Field in 1942, destined to remain there until good fortune shined upon it and the keepers of Naval Aviation history.

In 1961, J.R. Sirmons, an Oklahoma fertilizer and spray plane pilot hired to work in Nicaragua, discovered the G-23. Noting its similarity to an early-Grumman biplane fighter, Sirmons paid $150 for the machine, which was virtually intact other than missing elevators, tail struts, one cabane strut, and all flying wires. Obtaining erection and maintenance information from Grumman, Sirmons set about putting the G-23 into flyable condition, substituting parts from other aircraft and replacing the existing R-1820 engine (which would not exceed 1,500 RPM) with a R-1340-AN-1. Additionally, Sirmon’s wife and daughter helped sew fabric where needed.

By February 1966 the aircraft was restored to flying condition and Sirmons took it on a test hop, which revealed the G-23 to be “a delight to fly.” After displaying the plane in Managua at the Annual Nicaraguan Armed Forces Day Celebration and a heated argument with a junior customs official, which resulted in a brief jail stay, Sirmons departed for the United States. After stops in El Salvador, Mexico, and Brownsville, Texas, the aircraft arrived in Longview, Texas. It remained there until June 9, 1966, at which time Sirmons flew the aircraft to Bethpage, NY, where it was inspected by officials at Grumman. That fall Grumman acquired the G-23 from 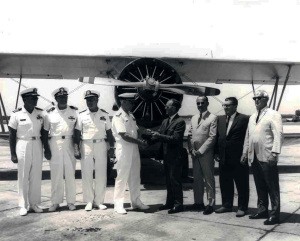 Sirmons and began to complete the restoration of the aircraft in the FF-1 configuration with the intention of displaying it around the country for a year before donating it to the Naval Aviation Museum. Painted in the markings of the “Red Rippers” of Fighting Squadron (VF) 5B, which in 1933 had been the first squadron to receive the FF-1, the aircraft flew the air show circuit until June 1967. On June 6, 1967, Captain Bill Scarborough, USN (Ret), departed Bethpage bound for Pensacola. After stops along the eastern seaboard, the “FF-1” arrived at Naval Air Station (NAS) Pensacola, three days later. After making low passes over the training carrier Lexington (CVT 16), Scarborough made a landing at Forrest Sherman Field. There, Vice Admiral Alexander S. Heyward, Chief of Naval Air Training, Rear Admiral Dick H. Guinn, Chief of Naval Air Basic Training, Captain James H. McCurtain, Officer-in-Charge of the Naval Aviation Museum, and others accepted it for the Navy.

The aircraft is painted in the markings of Bureau Number 9351 and is one of the few to have been displayed in both in the original museum building and at its current location.