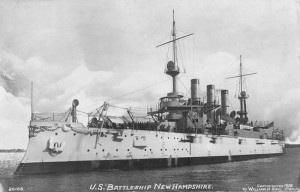 View of the battleship New Hampshire (BB 25) as she appeared in 1908.
Download

The throng of bluejackets crowded the pier beneath the gaze of the tall buildings of New York City, symbols of American might ashore just as the ships anchored in the Hudson River represented the power of the United States afloat. It was the unwelcome end of liberty for some members of the crew of New Hampshire (BB 25), one of the nation’s newest battlewagons, and as was the norm, it fell to one of the ship’s most junior officers to take charge of the returning sailors. Just months removed from the parade ground of the Naval Academy, Passed Midshipman Godfrey Chevalier was a native of Medford, Massachusetts, “a curious mixture of New England Yankee and temperamental Gaul” in the words of the academy yearbook, The Lucky Bag. A track star while at Annapolis, Chevalier had a reputation for making the girls smile and would likely have much rather been enjoying a night on the town himself than commanding the cutter that was gradually filling with sailors. Yet, it was his duty, and once loaded, Chevalier signaled one of New Hampshire’s launches to begin towing the cutter crowded with some ninety men back to the ship.

Under dark skies, the two vessels made their way toward the silhouettes of the fleet’s battleships lying at anchor in the distance. About 300 yards from shore, in the midst of a flood tide, strong winds kicked up waves that plunged repeatedly over the cutter’s bow, causing the occupants to move aft. In short order, the good-spirits in the aftermath of liberty were transformed into dismay for the men aboard as the cutter began to take on water and sink, its occupants tumbling overboard. Shouts of distress could be heard in the darkness as Chevalier and a few sailors that had managed to stay aboard detached the hawser being used to tow the cutter and threw out a small number of life buoys. The twenty-one year old passed midshipman then pulled off his uniform jacket and dove into the Hudson to help the men whose welfare, even for just a short boat ride, was entrusted to him. As other ships’ launches and civilian craft arrived on the scene, Chevalier kept swimming in the darkness towards the cries for help piercing the air, grasping sailors struggling to stay afloat and pulling them to safety. A seaman remembered, “You never saw anybody work the way he did. Every time I looked around it seemed it was to see him bringing a new man alongside to safety.” All told, Chevalier rescued sixteen men before he was himself pulled aboard a launch, shivering and completely exhausted. “Even then, hysterical with grief, when he learned that many others were missing, he wanted to go back and begin all over again,” noted an editorial that appeared in the Washington Post a few days after the tragedy. “But for the restraint of his comrades, he would have surrendered his own life in his zeal to save others.” 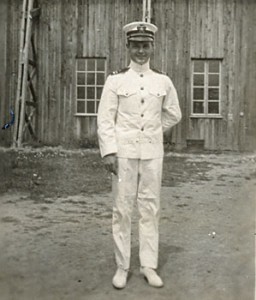 Amatuzio, Bonsall, Donohue, Turner—the list of the names of those drowned reached twenty-nine, most probably not personally known to Chevalier, but the loss of each weighing on his mind, sinking him into a level of grief never experienced in his young life. Adding to his turmoil was the customary convening of a Board of Inquiry. On 21 October 1910, the Navy released its findings, which did not mention Chevalier and concluded “that all extraordinary circumstances must have conspired fatally to transform an ordinary routine matter into a calamity.”

The tragedy that fateful day could have shaken the foundation of a career barely begun, but instead made it stronger. In 1912, Chevalier was cited for service in New Hampshire when he noticed that water was pouring into the engine room through an open valve as the ship was being refloated after a period in dry dock. He grabbed a bucket of red lead, crawled on his hands and knees through a narrow passage, and plastered the contents of the bucket on the faulty valve to form a seal. On an October day in 1922, now one of the Navy’s pioneer aviators, he became the first to land an aircraft on the deck of a U.S. Navy carrier underway, trapping on board Langley (CV 1). Nineteen days later he was dead, the victim of an airplane crash, the legacy of his service defined by his very name—chevalier—a gallant gentleman.