Today, Captain Robert L. Rasmussen, USN (Ret.), retires as director of the National Naval Aviation Museum, a position he has held for nearly three decades. He is the longest serving director in the museum’s fifty-one year history and there is not much about naval aviation that has escaped his attention during that time. Yet, just recently the previously hidden history of a fixture at the entrance to NAS Pensacola, revealed a surprising twist for him. 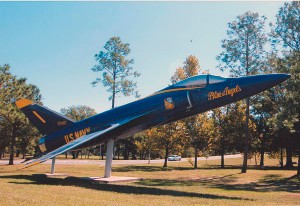 In 1965, NAS Pensacola personnel placed an F-11 Tiger near the front gate. Initially displayed in the light gull gray and white paint scheme of fleet aircraft, the airplane subsequently received a makeover to honor the air station’s most visible tenant command, the Navy’s famed Blue Angels flight demonstration team, which flew the F-11 during the period 1957–1968. For years, that is how it appeared to personnel and visitors entering the air station.

Earlier this year, as part of NAS Pensacola’s year long commemoration of its centennial, an F/A-18 Hornet, the current airplane flown by the Blue Angels, replaced the F-11, which as part of the museum’s inventory of historic aircraft, was made available for loan to another entity since the museum already displays an example of the airplane. Accordingly, it made its way to Discovery Park of America in Union City, Tennessee. There, while preparing it for display, personnel opened up the cockpit and found the data plate identifying the bureau number of the airplane—141869. Up until that time, no NAS Pensacola or museum officials had known this information. The bureau number had not been painted on the airplane and there had never been a requirement to access the cockpit 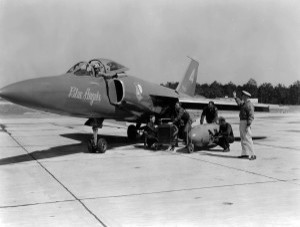 Lieutenant Robert Rasmussen gives the thumbs up to ground crewmen as he prepares for a flight from NAS Pensacola in 1959. He recently discovered that this airplane was displayed for nearly fifty years at the front gate of NAS Pensacola.
Download

“There was just something about it that sounded familiar,” Rasmussen recalled of hearing the bureau number. Digging out his aviator’s flight log books, which listed every flight he made during his three decades of service as a naval aviator, he soon found out why. In November 1958, while a lieutenant assigned to the Blue Angels, he had first flown the airplane at the Naval Weapons Industrial Reserve Plant on Long Island, a location where the Navy and Grumman Aircraft Engineering Corporation personnel flight tested company airplanes. It was the first of exactly 300 flights he would make in the airplane over the course of the ensuing fourteen months, many of them in flight demonstrations around the country as the slot pilot in the Blue Angels’ diamond formation, the airplane (then designated an F11F-1) emblazoned with the number “4” on its vertical stabilizer. In a fleet squadron, whether serving ashore or afloat, naval aviators generally do not fly the same airplane from one day to the next. However, that is not the case in the Blue Angels, and Rasmussen likely flew this airplane more than any other in his long flying career, including his last flight with Blue Angels in early 1960 before detachment from the team.

Fittingly the news came on the eve of his retirement, a link to his time in uniform emerging at the conclusion of years spent preserving naval aviation’s heritage.