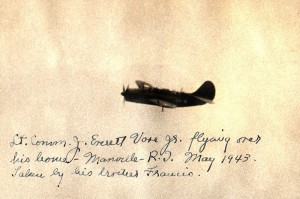 In May 1943, a lone aircraft flew over residences in Manville, Rhode Island, probably not an uncommon occurrence given the fact that that small state was home to Naval Air Station (NAS) Quonset Point. Residents had likely not seen this particular type of aircraft much in the skies, the SB2C Helldiver a relative newcomer to the Navy’s inventory of carrier-based aircraft. This was despite the fact that the sea service had issued a contract to Curtiss-Wright for production of the prototype on May 14, 1939, four years earlier. Technical maladies with everything from the hydraulic system to the functioning of the arresting gear gave the airplane a bad reputation. Yet, all of that would not have mattered to the family living at one of the homes in Manville that day even had they known about it. As they aimed their camera skyward that day, the only thing about which they cared was the pilot of the aircraft, their son and brother, Lieutenant Commander James E. Vose, Jr.

Six months after flying over his home, Vose found himself in the cockpit of an SB2C Helldiver leading his squadron, Bombing Squadron (VB) 17 off the carrier Bunker Hill (CV 17), in much less hospitable skies over Rabaul, a heavily defended harbor that had been labeled the “Gibraltar of the Pacific.” Vose recalled the day in an interview with Bureau of Aeronautics officers months later.

“We started climbing as soon as we left the ship and got up to about 12,000 feet…Over Blanche Bay we encountered antiaircraft fire, rather heavy, extremely inaccurate. Meanwhile, Zeros equipped with phosphorous bombs that exploded with long white streamers were flying over us and trying to drop them on us. Then we launched our attack.” 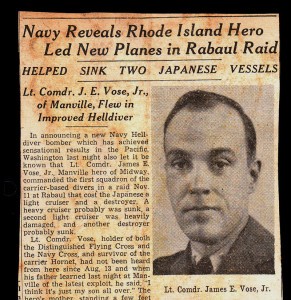 “No attention was paid to [diving out of] the sun or anything; we took the straightest line to the target, got in and got out. You can’t make this old hell-for-leather, straight up and down, dive,” he commented on the high diving speed of the SB2C in contrast with the SBD Dauntless, an aircraft he had flown during the Battle of Midway and Battle of Santa Cruz, receiving the Navy Cross for his actions in the latter engagement. “You definitely have to push over gradually and make a step-ladder approach. By that I mean come down, pull your nose up at about 7,000 feet, and then go into it, which is the way you always should always dive on a moving target.”

In contrast to today’s smart weapons, Vose’s comments on bombing accuracy are revealing. “Some fabulous stories have come out of this war about 100 percent hits and 80 percent hits by a dive bombing squadron. If you can send 18 flights against a maneuvering heavy cruiser and get six hits, you’ve got a good squadron.”

Understandably, the press and the Curtiss-Wright publicity department were more colorful in describing the SB2C’s role in the raid, the first for the SB2C, one lead sentence to a story reading, “Born in the Navy and baptized at Rabaul, a deceptively beautiful charmer with a heart for alley fighting is bombing the life out of the Japs.” To be sure, few would ever liken it to a beauty—the SB2C’s nickname was the “Beast”—but Rabaul would be but its first step on the road to victory.