One of the most famous aircraft in history, owing to its sheer size and the eccentricity of its creator more than actual performance, was the H-4 Hercules, better known as the “Spruce Goose.”   The brainchild of Howard Hughes, the aircraft was constructed during World War II at the height of U-boat supremacy in the Battle of the Atlantic, the mammoth flying boat that stretched 219 feet in length and had a wingspan the size of a football field viewed as an alternative to ships in transporting men and materials overseas.  When it finally took to the skies on November 2, 1947, an unplanned event during what were supposed to be only taxi tests, the local Long Beach, California, paper trumpeted “It Flies” in a headline across a photograph of the airplane just over the water. 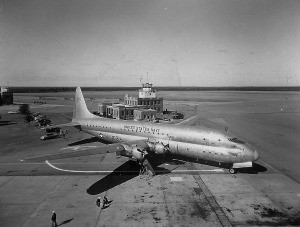 R6O Constitutions dwarfed everything around them when they made their appearances at naval air stations around the country.
Download

The airplane never flew again and although it was indeed incomparable with any other aircraft, its first flight occurred in the immediate postwar years when the U.S. Navy ironically began operating two of the largest aircraft to ever serve in its inventory.  And in February 1949, sixty-six years ago this month, the R6O Constitution and JRM Mars each made history with record-setting distance flights.

Like Hughes’ airplane, the R6O and JRM were products of wartime requirements that ended before the airplanes were operational.  First designed by Lockheed Aircraft Company to meet a Pan American Airways requirement for a larger passenger airplane , the R6O eventually gained the sponsorship of the Navy at the behest of the airline, which following the entry of the United States into World War II, flew over 90 million miles around the world in support of the war effort.   In final form, the aircraft stretched over 156 ft. in length with a wingspan of nearly 190 ft., with a fully loaded weight of 184,000 lb.  The latter characteristic required specialized main landing gear on which the wheels were spun by electric motors before touchdown and, in its final configuration, a power plant of four 3,500 horsepower Pratt & Whitney R-4360 engines.   Eventually nicknamed Constitution, the first of two R6Os built, made its maiden flight from the Lockheed Air Terminal in Burbank to Muroc, California, on November 9, 1946.  A Naval Aviation News article from that time stated that “ten thousand persons lined the runways and roads around [the] Lockheed plant to see the big plane take off and many were still on hand to see it land on its return trip, in less space than is required by standard twin-engine commercial transport. “

While Lockheed developed the R6O, the Glenn L. Martin Company focused on design of a flying boat, which carried on a proud tradition of seaplane designs for the company.  Though originally intended as heavily armed patrol-bomber that Martin public relations people characterized as a “flying battleship,” its main battery including provisions for a 10,000 lb. bomb load, the XPB2M Mars design instead drew the Navy’s attention as a transport on the order of Hughes’ H-4.  In fact, shipbuilder Henry Kaiser initially approached Glenn L. Martin about teaming up for large-scale production of the design, joining with Hughes in the Spruce Goose project when rebuffed by Martin.  Thus, the XPB2M went from carrying bombs to cargo, serving in the Pacific Theater during much of World War II.  Its success prompted the Navy to procure a modified version of this aircraft in June 1944, the twin-tail of the XPB2M replaced by a single tail and the fuselage made longer.  With four 2,300 horsepower Wright R-3350 engines, the aircraft had a length of some 120 ft. and in its fully loaded configuration, weight 145,000 lb.  The designation of this aircraft in the Navy’s system, JRM, reflected its new mission.

The wartime island conquests created a network of airfields that made overseas flights by landplanes more viable and shrunk the Navy’s order for the JRM to five aircraft, four of them JRM-1 versions and one a JRM-2 powered by 3,000 horsepower Pratt & Whitney R-4360 engine (the four JRM-1s were later fitted with more powerful engines and redesignated JRM-3s).  When they entered service, in the tradition of the Pan Am Clippers of the 1930s, all of the aircraft received names after island groups—Philippine Mars, Hawaii Mars, Caroline Mars, Marianas Mars, and Marshall Mars. 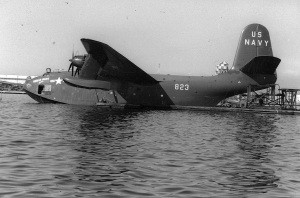 By 1947, all five of the JRMs had been accepted into service, and on February 2, 1949, the first R6O joined Transport Squadron (VR) 44 at Naval Air Station (NAS) Alameda, California.  It wasted no time making its mark.  The following day, aided by Rocket Assisted Take Off bottles, Commander William M. Collins roared aloft trailing a cloud of smoke, the Constitution leaving the runway at NAS Moffett Field, California, behind and setting course for Washington D.C.  On board were 90 people, including crew and passengers, the latter well taken care of by Navy steward’s mates during the flight.  “[They] served 180 meals during the day from a galley that would put many apartment-sized kitchens to shame,” read one news report.  “The first round consisted on 90 T-bone steak dinners.”   Nine hours and 35 minutes later, the aircraft descended from the night sky for a landing at National Airport in Washington D.C., “eased onto the runway so skillfully that some passengers were not aware it was down.”  The flight established a new record for the number of people carried by an aircraft on a transcontinental flight, Lockheed officials seizing upon the accomplishment and predicting that airplanes like the Constitution would be commonplace in civilian airlines within five years.

Twenty-two days later it was the Mars’ turn to fly into the record books.  Launching from the waters off NAS Alameda, California, carrying 202 passengers and four crewmen, the JRM-2 flew almost the length of California, landing at NAS San Diego, the flight breaking the previous record for passenger lift that had been established by a German airplane when it carried 169 people aloft in 1929!  It took less than a day rather than two decades for the new mark to fall, the JRM-2’s return flight to NAS Alameda carrying 222 passengers and crew!

For all the promise the two aircraft held on those days in February 1949, their subsequent careers diverged.  The Constitutions proved to have insufficient range for the transport role and by 1953 were in storage, destined to never fly for the Navy again.  Service as commercial airliners also never materialized.  The Mars aircraft operated in naval aviation until 1956, traversing Pacific waters carrying everything from cargo to wounded personnel being evacuated from the front lines of Korea.  After retirement from naval service, surviving aircraft became aerial tankers used to fight forest fires, with two remaining operational to this day, with one possibly coming to roost at the museum in the future.