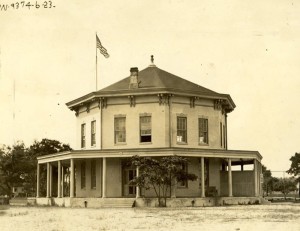 A view of the octagonal Building 16 as it appeared during 1923.
Download

While the word pentagon is synonymous with the massive building that houses the Department of Defense, for those familiar with the structures on board Naval Air Station (NAS) Pensacola, another geometric shape, in this case an octagon, is synonymous with a particular building on the base. Not only is it one of the more unusual buildings standing within the confines of the old navy yard, it is one of the most historic anywhere on the air station.

Building 16 was constructed before 1836, the year it first appears on maps of the navy yard and less than a decade after the yard’s construction. Interestingly, the building predates the statehood of Florida, which occurred in 1845. The first uses of the structure, which from the beginning featured its unique octagonal shape, would appear to be incompatible with each other. The first floor housed the navy yard’s armory while the second floor served as a chapel! During the first decades of its existence, modifications to the building were minor, the most extensive being the addition of a platform around the perimeter of the structure. 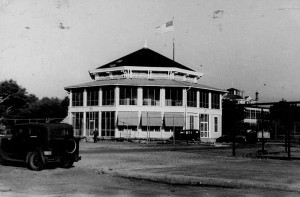 Building 16 served as the Officers Club on board Naval Air Station (NAS) Pensacola, Florida, until World War II. This image was taken during the late 1930s.
Download

When the first naval aviation personnel arrived in Pensacola in January 1914, many of the buildings on board the old navy yard were either occupied by a contingent of Marines or in need of modification to support aviation functions. While the newly arrived personnel initially berthed on board the station ship Mississippi (BB 23), the ensuing months of 1914 were devoted to establishing the infrastructure to support operations at the new naval aeronautic station. In a December 12, 1914, letter to Lieutenant Kenneth Whiting, officer-in-charge of the aeronautic station, Director of Naval Aviation Captain Mark Bristol wrote, “Now, with the general idea of using buildings 34 and 16 for bachelor officers, what can be done at once with a small amount of money to establish a mess in one of these buildings so that the officers now at the Station will at least have some place to get their meals and some place for lounging?…Sometime in the future we will have to consider something better that building 34 and 16, but I am afraid it is utterly impossible to do anything on this line now.”

Building 16 would be the chosen structure to accommodate the officers on the station and served that purpose until the construction of the Mustin Beach Officers Club during the World War II era. During its time in that role, a columned porch was constructed over the concrete platform and the interior was modified to make way for a lounge, ballroom, kitchen, and locker room. Additionally, a tennis court was constructed alongside the building. In 1939, Building 16 received probably the most popular modification to those who spent time there in the form of air conditioning to combat the heat and humidity of Northwest Florida. 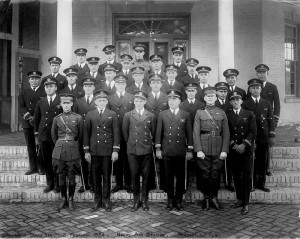 While serving as the officers club, Building 16 was the backdrop for class photographs taken when classes completed flight training, the surviving images of men in Navy blue and Marine green including many who served with distinction as naval aviation developed during the 1920s and 1930s and came of age in World War II. Some returned to Pensacola as admirals in command of elements of the sizeable training command during the Cold War.

Since the end of its days as an officers club, Building 16 has served as home to everything from medical research to the Navy Relief Society to a courtroom. Extensively renovated in 2003, it was one of a small number of buildings in withing the confines of the old walls of the navy yard that survived the ravaging winds and high water levels wrought by Hurricane Ivan, which came ashore in the Florida panhandle in 2004.  Today, it continues to support the Navy in Pensacola nearly 180 years after the laying of its foundation in the days of sail.  Since that time, the likes of Farragut, King, and Halsey have at one time or another passed by or stepped inside the octagon.