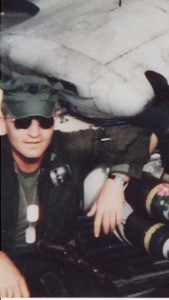 On January 3, 1969, in a ceremony held on board Naval Air Station (NAS) North Island, California, the Navy established its first fixed-wing light attack squadron, VAL-4, squadron members adopting the nickname “Black Ponies.” The squadron, like Helicopter Attack Squadron Light (HAL) 3, established in 1967, was brought into existence to fulfill a tactical requirement of the Vietnam War, namely providing close air support for riverine and special warfare operators in the Mekong Delta.

Trained to fly the OV-10A Bronco, a twin-engine light armed reconnaissance aircraft acquired from the Marine Corps, VAL-4 went overseas, arriving in South Vietnam. There they operated from Binh Thuy Air Base and Vung Tau Army Airfield, which were in close proximity to the rivers and jungle of the Mekong Delta. Two of the naval aviators assigned to VAL-4 were Lieutenant Pete Russell and Lieutenant (junior grade) Jeff Johnson. Russell had already made something of a name for himself in combat over Vietnam. While flying A-1H Skyraiders with Attack Squadron (VA) 176, he was one of four squadron pilots who engaged North Vietnamese MiG-17 jets in air-to-air combat. Following in the footsteps of an older brother, who was an A-4 Skyhawk pilot in the Navy, Pete Russell was a devoted to flying propeller-driven aircraft and shunned jets to become one of the first pilots ordered to VAL-4.

On May 25, 1969, VAL-4 aircraft received radio calls for assistance from two Navy river patrol boats (PBR) taking fire from Viet Cong positions in the jungle along the Cai Lon River Arriving quickly on scene to the surprise of some of the boat crews—VAL-4 had been in country for a relatively short time and not all of the men of the riverine forces were aware of their existence—the OV-10 flown by Russell and Johnson along with the airplane of their wingmen, Commander Gil Winans and Lieutenant (junior grade) Roy Sikkink, executed a series of rocket attacks against the enemy positions. When their rockets were expended, they initiated close-in strafing runs in using the M-60 machine guns on their aircraft. 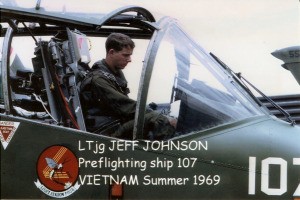 Lieutenant (junior grade) Jeff Johnson preflights an OV-10 Bronco during his service in VAL-4 in South Vietnam. The aircraft he sits in is now displayed at the National Naval Aviation Museum.
Download

Flying Black Pony 107, Russell and Johnson were making a strafing run when a single 7.62 millimeter round struck the right side of the canopy of the front cockpit, hitting Russell in the head. From his position in the rear cockpit, Johnson had been leaning forward over the top of Russell’s ejection seat to get a good view of the strafing run when the bullet struck. He slumped over to the left after pieces of shattered Plexiglas struck him in the face, but quickly realized that the airplane was in a steep dive and the control stick between his legs was offering no resistance when he moved it. That fact and the lack of response to his radio calls to Russell indicated that the pilot was incapacitated, prompting Johnson to pull back on the stick. The OV-10 responded, exiting its dive just thirty-five feet over the water.

Johnson flew the airplane back to Binh Thuy with the engines at full throttle, not knowing until he landed that Lieutenant Pete Russell had been killed. “For the Black Ponies, it was a wake-up call,” Johnson later recalled. “I think everybody now realized this was serious business. “

Black Pony 107 (Bureau Number 155472) would return to the skies, flying numerous combat missions with VAL-4 before returning to Marine Corps service. Modified to the OV-10B configuration during its later service, it doesn’t appear as it did in 1969 when visitors to the National Naval Aviation Museum stare up at it. However, it is the same airplane in which a heroic naval aviator made the ultimate sacrifice for his country.