During the Battle of Midway, Lieutenant Commander John S. Thach assembled a list of his pilots and their actions in one of the landmark battles in U.S. Navy history, the penciled names representing a unique generation of Naval Aviators. 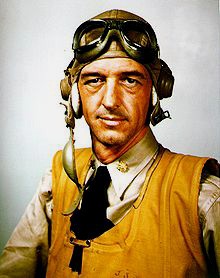 When Lieutenant Commander John S. Thach, commanding officer of Fighting Squadron (VF) 3, sat down to summarize the performance of his squadron at the Battle of Midway, he and his squadron were homeless. Their floating home, the aircraft carrier Yorktown (CV 5), had been abandoned after suffering numerous bomb and torpedo hits by Japanese aircraft. Those VF-3 personnel aboard had abandoned ship, while those pilots aloft in their F4F Wildcats had sought refuge on the undamaged carriers Enterprise (CV 6) and Hornet (CV 8). Thach found himself on board the latter ship, her ready rooms emptier than they had been previously. All of the TBD Devastators of Torpedo Squadron (VT) 8 had been shot down with only Ensign George Gay surviving. In addition, after a fruitless search for the Japanese Fleet, ten F4F Wildcats of Fighting Squadron (VF) 8 had been forced to ditch their aircraft for lack of fuel. Two of the fighter pilots were never seen again, while the others spent time floating in their life rafts before being rescued.

As for his own squadron, Thach began listing their names on VF-8 stationary, beginning with his own, next to each one recording the number of aircraft certainly shot down and the number probably shot down or damaged by each aviator. The ranks jump straight from Lieutenant Commander Thach to Lieutenant (junior grade) Leonard, reflecting the fact that VF-3’s Executive Officer, Lieutenant Commander Donald Lovelace, had been killed even before the Battle of Midway began, an F4F Wildcat crashing into his plane on the flight deck while VF-3 recovered on board Yorktown on May 29th. Thus, the operations officer, Lieutenant (junior grade) William Leonard, a future admiral, appears below Thach, one of the six pilots listed who became aces with five or more air-to-air kills. Below Leonard’s name is that of Lieutenant (junior grade) Richard Crommelin, one of five brothers from Wetumpka, Alabama, to attend the U.S. Naval Academy and serve in the Navy, four of them wearing the wings of gold. Tragically, Crommelin would be killed in action over Okinawa later in World War II while commanding his own squadron, VF-88, flying from the new carrier Yorktown (CV 10). In addition, seven other men on the list assembled by Thach would not live to see the end of World War II, nearly thirty percent of the squadron complement at Midway. These included Ensigns George A. Hopper, Jr., and Edgar A. Bassett, who Thach noted as “missing” and “shot down” respectively, having no word of their ultimate fate at the time. Other pilots initially listed as “missing” have had their statuses changed to “OK,” certainly much to the relief of the squadron skipper.

At the end of the document, Thach tallies what is known about VF-3’s performance during the Battle of Midway, which totals twenty-six enemy aircraft shot down and 14 others listed as damaged or probably shot down. Postwar evaluation of American and Japanese sources has credited Thach and his pilots with 33 enemy aircraft shot down to go with 11 probables and six enemy aircraft damaged. This was by far the best performance of any of the fighter squadrons that flew during the Battle of Midway and reflective of Thach’s entire tenure as squadron skipper, which included Lieutenant Edward H. “Butch” O’Hare’s single-handed defense of the carrier Lexington (CV 2) off Rabaul on February 20, 1942, for which he received the Medal of Honor. During his command of VF-3, Thach also perfected the famed maneuver that would bear his name—the “Thach Weave.”

Thach relinquished command of VF-3 just days after the conclusion of the Battle of Midway, his onetime protégé “Butch” O’Hare replacing him as skipper. Of O’Hare, Thach had once written that he possessed the “skill, technique [and] guts” that made for a good fighter pilot. The same could be said for Jimmy Thach and the men whose names he quickly jotted down on board Hornet seven decades ago.