During the interwar years transoceanic flight was a focus of attention in both military and civilian aviation circles, the epic feat by Charles Lindbergh in flying non-stop across the Atlantic in 1927 standing as one of the seminal feats in aviation history. In naval aviation, long-distance flying was the domain of the flying boat beginning with the NC-4’s traversing of the Atlantic in May 1919. As more advanced aircraft emerged from the nation’s aircraft factories and were delivered to Navy patrol squadrons, extended flights pushed the envelope as these units prepared for their wartime missions of long-range scouting, especially in the Pacific, the envisioned battleground with the burgeoning Imperial Japanese Navy. 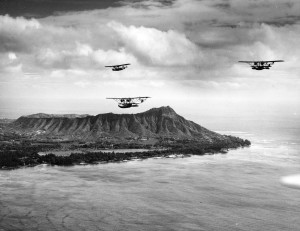 One such flight occurred in January 1934, when six P2Y-1 flying boats under the command of Lieutenant Commander Knefler McGinnis launched from San Francisco bound for the Hawaiian Islands. While Navy officials publicly characterized the flight as just a routine transfer of airplanes between the West Coast and Hawaii, a newspaper reporter covering the event noted that the planned flight path had been successfully accomplished only five times before, the last in 1928.

Unfavorable winds and tides combined with the weight of the aircraft that were packed with fuel delayed the launch time, but by around half past two local time on January 10, 1934, the six P2Y-1s had passed over the Golden Gate headed west. Manufactured by Consolidated Aircraft Company, the P2Y represented a transitional design. While still a biplane, its lower wing was much shorter than the upper wing, eliminating struts and stabilizing pontoons with corresponding improvement in performance.

It would take all the performance the planes could muster during the first 600 miles of the flight, with the crews encountering strong headwinds. As night fell, matters were made worse as the airplanes entered a fog bank. “Low rifts of it swirled over the sea,” recalled Lieutenant James K. Averill. “We dove down until our pontoons were no more than three feet from the waves, but it was foggy there too, so we climbed again.” The two three-plane sections became separated, with the searchlight from one of six ships stationed along the route helping the orient the crews. The stars and moonlight breaking through the clouds ended fourteen hours of flying through darkness, including seven hours of blind flying through the fog. Better visibility combined with emerging tailwinds to make the remainder of the route smooth sailing. 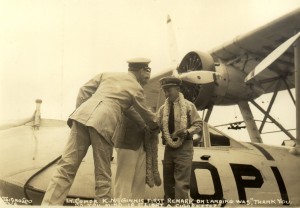 A little more than 24 hours after their departure, the six aircraft could be seen from Koko Head on Oahu. A newspaper reporter described the roaring welcome that “that greeted the six planes as they soared out of the east in graceful formation and skimmed to a stop in the calm waters of Pearl Harbor…Tugs and steamers shrieked blasts from their whistles to add to the deafening ovation.” Tired from their flight, the airmen climbed from their aircraft, with one mindful of the welcome that awaited him emerging freshly shaven.

The 24 hours 35 minute flight bettered the best previous time for the crossing, exceeded the distance of previous mass flights, and broke a nine-day-old Class C seaplane world record for distance in a straight line with a new mark of 2,399 miles. Among the accolades heaped on the airmen that appeared in newspapers in the aftermath of the flight was a comment by a Japanese naval spokesman. “It [the flight] shows what increased powers this development has placed at the disposition of mankind. It remains to be seen whether these powers will be used beneficently or destructively.” Ironically, nearly eight years later, McGinnis would be present in Hawaii commanding Patrol Wing One at Naval Air Station (NAS) Kaneohe when Imperial Japanese Navy planes sought to wreak destruction on the U.S. Pacific Fleet one Sunday morning, drawing the United States into the most destructive war mankind has ever known.