posted in FROM THE COCKPIT: STORIES OF NAVAL AVIATION on September 14, 2012

The California to Hawaii flight of the PN-9 under Commander John Rodgers in September 1925, fell short of its goal, yet grabbed headlines that prompted changes in naval aviation at the highest levels.

On the afternoon of August 31, 1925, a pair of Navy flying boats plowed through the waters of San Pablo Bay and ascended beneath wings with their fabric coverings painted a brilliant yellow. “A swarm of aircraft, including escort naval planes and planes bearing photographers, hovered around the PN-9’s (sic) as they began their epical adventure,” reported a newspaper reporter on the scene. “Launches, ferryboats, and sight-seeing boats joined in giving the flying sailors a noisy send-off.” Each carried aloft a crew of five, the hulls of the aircraft packed with over 1,200 gallons of fuel, all of it necessary to complete what was to be a record flight over Pacific waters to Hawaii. 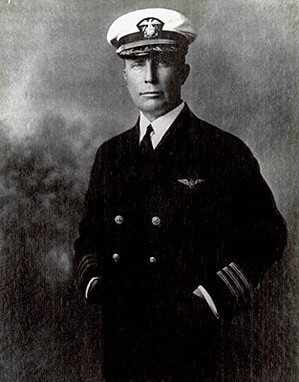 As was the case with the Navy’s transatlantic flight in May 1919, three planes had been earmarked to make the journey, and mirroring the events of six years earlier, problems arose, with one plane unable to even begin the flight due to mechanical difficulties. Then, 300 miles off the coast of California, another one of the flying boats, the PN-9 Number 3, made a forced landing, the destroyer William Jones (DD 308) rendering assistance. That left PN-9 Number 1 in the air. And just as Lieutenant Commander A.C. Read had done in the NC-4 over the Atlantic, Commander John Rodgers hoped to be the only plane to reach the goal of bridging ocean waters and reaching his destination.

If not for the rigidity of the Navy’s bureaucracy, Rodgers may have well been on one of the NC flying boats in 1919. The second officer designated a naval aviator, he was the scion of one of the most distinguished naval families in America, his ancestors having fought in the War of 1812 and the Civil War. Trained by the Wright brothers in 1911, he served at the first aviation encampments at North Island, California, and Greenbury Point, Maryland. Yet, by 1912 he was out of aviation, the Navy’s requirement for sea duty for promotion prompting Rodgers’ return to the fleet. He remained out of the cockpit for a decade, serving in battleships, submarines, and other surface craft, not returning to aviation until 1922. By that time, the flying force was much different than the one he had departed, having fought a world war and also commissioned a revolutionary fighting ship. Yet, the aircraft carrier was in its infancy, and seaplanes remained the backbone of naval aviation.

It was also an era of transition in the U.S. military, particularly with respect to whether the nation needed an independent air force, a leading proponent of which was Army Air Service Colonel William “Billy” Mitchell. The Navy’s Chief of the Bureau of Aeronautics, Rear Admiral William A. Moffett, fiercely guarded the Navy’s control over its own aviation assets. The flight between California and Hawaii to which Commander John Rodgers was assigned command would demonstrate the capabilities of naval aircraft. 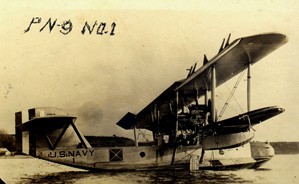 As the afternoon and evening of August 31st gave way to midnight and the dawning of September 1, 1925, Rodgers’ PN-9 maintained its course westward. While there were station vessels positioned along the route, a report of potential forced landing situations made before the flight noted that the number of ships was smaller than that employed in the flight of the NC-4 and highlighted how difficult it had been to locate two airplanes forced down during that flight. Rodgers and his crew passed in close proximity of the first series of station ships, at which time they noted their fuel supply was dwindling quicker than expected, prompting a decision to land near the seaplane tender Aroostook (CM 3) to refuel. However, despite receiving radio bearings from the ship, the PN-9 was beset by poor visibility as it passed through rain squalls. Rodgers had no choice but to order the pilot, Lieutenant Byron J. Connell, to set the plane down. He “landed the plane under the most difficult conditions- no power, high seas, and very little wind. An excellent landing was made, the plane never leaving the water after first striking it.” Little did they know that the floating aircraft would be their home for the next nine days.

Of immediate concern were rations. When the PN-9 landed, rations on board included 12 sandwiches, 10 quarts of water, 2 quarts of coffee, 3 pounds of hard tack, and 6 pounds of canned corned beef. Over the course of the men’s time adrift, the dwindling water supply became the biggest threat to their welfare. In this the men fortuitously received water from Mother Nature, catching several quarts in fabric torn from the wings. The fabric also served another purpose, the crew using it to fashion sails, the airplane’s ailerons and rudder assisting with steering. In addition, metal floor boards from the flying boat were lashed along the hull and used as leeboards, improving the ability to steer.

As a sailing vessel, the PN-9 covered a distance of 450 miles before the crew spotted the island of Kaui, though landing on it presented its own potential challenge in the form of coral reefs off shore. As they neared the island, the men made smoke signals by burning fabric and rags in a bucket, placing one man on the top wing waving another piece of fabric tied to a stick. Ten miles off shore, lookouts on board the submarine R-4 spotted the battered PN-9 and took the plane under tow. While being pulled along, the men enjoyed 5 gallons of water and canned fruit passed to them by the submariners. 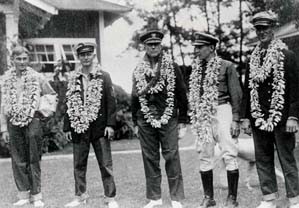 Though not reaching their destination through the air, Rodgers and his crew traveled 1,841.12 statute miles before their forced landing, the distance accepted as a record for Class C seaplanes that remained unbeaten for five years. Though the ordeal at sea grabbed headlines, they were shared with those announcing other events that occurred while the PN-9 drifted in the Pacific. On September 3rd, the rigid airship Shenandoah (ZR 1) crashed in a storm over Ohio with the loss of fourteen members of her crew, including commanding officer Lieutenant Commander Zachary Lansdowne. In the wake of this tragedy and the disappearance of the PN-9, Billy Mitchell went to the press with bombastic claims of political motivation and negligence in both the Army and Navy Departments.

Taken together—the Mitchell statements, PN-9 flight, and Shenandoah disaster—the events of September 1925, prompted President Calvin Coolidge to convene a special board to make recommendations on aviation policy in the United States. Named the Morrow Board after its chairman Dwight Morrow, who would later become Charles Lindbergh’s father-in-law, the group eventually recommended against an independent air force, called for more aviation representation at high levels of command, and established policies for long-range aircraft procurement, all of which placed naval aviation on firm footing for its tremendous advancements in the interwar years.

Sadly, Commander John Rodgers did not live to see any of this come to fruition, his life ending in an aircraft accident less than a year after the PN-9’s flight, one that despite falling short established a record and was a catalyst for a turning point in naval aviation history.