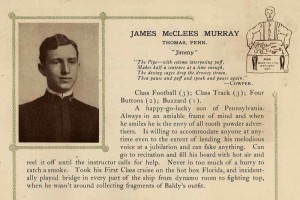 Long before a British monarch abdicated his throne to marry her and she became the Duchess of Windsor, Wallace Warfield Spencer lived in Pensacola, the wife of a naval aviator. One of her memories of that time was the sound of the bell that would toll when one of the training planes at the naval aeronautic station in Pensacola had crashed. “Whatever else we might be doing on our own account, our subconscious was always waiting for it to sound. Then, once it had sounded, the first frightening thought was ‘Has it sounded for me?’”

Unfortunately, accidents were a frequent occurrence in the early days at Pensacola given the fact that the science of aviation was in its infancy, airplanes were primitive in design, and the pilots learned to a certain extent by trial and error. The U.S. Navy’s first fatality occurred when Ensign William D. Billingsley crashed into the Chesapeake Bay on June 20, 1913, while flying from the aviation encampment at Greenbury Point, Maryland. After naval aviation operations shifted from that site to Pensacola, it was only a short time before Lieutenant (junior grade) James M. Murray lost his life in an aircraft crash, the first aviation fatality to occur at what became known as the “Cradle of Naval Aviation.”

A member of the U.S. Naval Academy’s Class of 1907, where the amiable midshipman’s smile was “the envy of all tooth powder advertisers” in the words of his classmates, Murray spent his first years following graduation at sea on armored cruisers. Like other pioneer aviators he was drawn to submarine duty before turning to flying, commanding one of the earliest boats to operate in the Navy, the A-2 (later named Adder), in the Asiatic Fleet.

Murray reported to Greenbury Point for flight training on July 30, 1913, and was among the complement of aviation personnel who boarded the battleship Mississippi (BB 23) in January 1914, and set course for Pensacola to establish the Navy’s first aeronautic station. On the afternoon of February 16, 1914, Murray took the controls of the D-1 flying boat and ascended from the waters of Pensacola Bay for a training flight. A short time later, Murray’s Naval Academy classmate, Lieutenant (junior grade) Patrick N.L. Bellinger taxied to shore following a flight of his own and heard yelling from shore asking if he had seen Murray’s airplane. Told where he was supposed to have been operating, Bellinger immediately took off and reached an altitude of about 100 feet heading towards Pensacola when he spotted the wreckage of the D-1 in the bay. Alighting on the water nearby, Bellinger spotted Murray floating on the surface and quickly maneuvered his airplane to a point where he could pull his fellow officer aboard. It was too late. Lieutenant (junior grade) James M. Murray, age 30, had drowned. “His death affected me very deeply,” Bellinger later wrote. “It also greatly affected our whole outfit. His was the first death at Pensacola and we had only been flying there two weeks.”

Out of respect for their comrade, no aircraft flew from Pensacola for the next two days, but then operations began again in earnest, with Bellinger destined to fly in combat, establish an altitude record, and perform successful catapult tests in the coming months. When the Navy adopted the designation “naval aviator,” Murray would posthumously be designated Naval Aviator Number 10. Bellinger was number 8, the danger of his professional calling evident in the fact that of the first ten naval aviators, half perished in aircraft accidents.