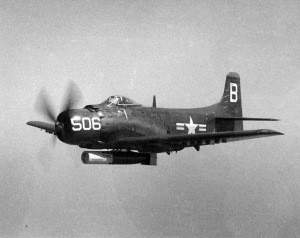 An AD Skyraider of Attack Squadron (VA) 195 carrying a torpedo pictured in flight en route to strike the Hwachon Dam on May 1, 1951
Download

In the terse language typical of Navy action reports, Attack Squadron (VA) 195’s commanding officer noted in the May 1, 1951, entry in the squadron’s chronology the following air operations over Korea. “One bridge strike, one close air support, an Armed Reco, and a Dam Torpedo strike was (sic) launched. Eight torpedoes dropped (2 by VC-35).” The description of the mission made it seem routine, a typical day for a squadron operating over Korea, but to be sure there was nothing further from the truth about the torpedoing of the gates of the Hwachon Dam by AD Skyraiders from the carrier Princeton(CV 37).

The genesis behind one of the most unique strike missions flown in U.S. naval aviation history was the key strategic position occupied by the Hwachon Dam, which was located some 50 miles northeast of the South Korean capital of Seoul. Built during the Japanese occupation, the dam served to hold back the waters of the Pukchong and Han Rivers. By April 1951, the ground campaign in Korea, which the year before had been marked by the daring landings at Inchon, subsequent offensive into North Korea, and sudden counterattacks by Chinese forces across the Yalu River, was concentrated around Seoul. Here the two rivers had the potential to shape the battlefield. If Communist forces that held the Hwachon Dam opened its gates, the resulting flooding would stop advancing United Nations forces. The enemy could also keep the gates closed, lowering water levels and making it easier for their own forces to advance.

Attempts by ground forces to seize control of the dam had met fierce resistance and been beaten back, which prompted the sending of a message from Eighth Army headquarters to Rear Admiral Ralph Ofstie, Commander, Task Force 77. Navy assistance was needed to knock out the Hwachon Dam as Communist forces began launching a spring offensive.

As fortune would have it, the carrier Princeton had been decommissioned just a year before the outbreak of hostilities in Korea in June 1950. Upon recommissioning, her bomb magazines were replenished with the same ordnance removed a short time before, which included Mark XIII aerial torpedoes. These seemed ideal weapons for the task and crews set to work loading the “fish” and modifying the Skyraiders that would carry them, the length of the torpedoes necessitating that the bottom panel of the airplanes’ speed brakes be disabled. Meanwhile, aviators of VA-195 and Composite Squadron (VC) 35, few of whom had been trained in torpedo tactics, figured out the details of the mission from the angle at which the torpedoes would need to enter the water to the optimal speed for release. Adding to their worry was the fact that the approaches to the dam were heavily defended by enemy antiaircraft guns. 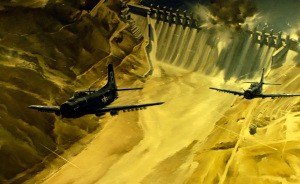 Artist R.G. Smith's portrayal of the attack against the Hwachon Dam.
Download

The following day, May 1, 1951, Commander Dick Merrick, Commander, Carrier Air Group 19, led eight Skyraiders (five from VA-195 and three from VC-35) off the deck of Princetonand set course for the Hwachon Dam. Among them was then Lieutenant (junior grade) James R. Sanderson, who recalled the attack run. “Down we streamed at tree-top level, throttled back almost to idle…This approach seemed like we were in slow motion. Even so, I felt rushed when slowing the rate of descent to attain level flight at 75 feet on the radar altimeter. Approaching 1,000 yards from the dam, I eased the nose of the aircraft down slightly. As the radar altimeter approached 50 feet, I gave the center station jettison handle a firm, steady tug. The aircraft responded with its customary jump, giving thanks for the lighter load.”

Six of the torpedoes ran true, knocking out two gates and damaging another one, which sent water pouring through and raised the level of the rivers, blocking advancing Communist troops. In addition, no longer would the enemy be able to control the water levels, that job passing to Mother Nature.

In the ensuing days the aviators on board Princeton flew hundreds of other sorties, yet the strike of May 1, 1951, was destined to always be remembered.  Though they were not  the first aviation squadron to adopt the nickname, that honor resting with Number 617 Squadron of the Royal Air Force for conducting Operation Chastise against dams in Germany on May 17, 1943,  VA-195 quickly changed from “Tigers” to “Dambusters,” the name Strike Fighter Squadron (VFA 195 retains to this day.