posted in AIRCRAFT IN THE SPOTLIGHT on January 18, 2013 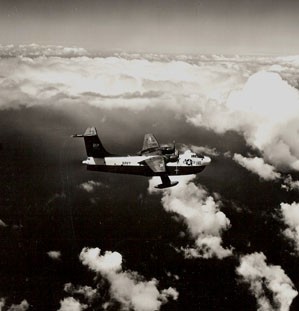 The museum’s example of the SP-5B Marlin holds a distinct place in naval aviation history in that it made the last operational flight of a Navy flying boat in 1967. Yet, seven years earlier, the crew of another Marlin achieved some notoriety in a way that only a flying boat could.

In February 1960, P5M-2 Marlins (the P5M-2 was redesignated the SP-5B in 1962) of Patrol Squadron (VP) 44 had completed participation in Operation Springboard in the Atlantic Ocean and were returning to Naval Air Station (NAS) Norfolk, Virginia, from Puerto Rico. On board the airplane flown by Lieutenant Raymond W. Myers, the 13-man crew, which included Royal Canadian Air Force Flight Lieutenant H.E. Smale, was anxious to return home. However, their airplane had other plans. While flying at an altitude of 8,000 ft., the they noticed the starboard engine on fire, the flames licking at the wing and engine nacelle. Myers had a choice to make— order the crew to begin bailing out or land the plane. After immediately jettisoning two 500 lb. fuel tanks that were positioned in the bomb bay of the starboard engine nacelle and feathering the prop of the burning engine, he descended to an altitude of 1,000 ft., and made ready to set the mammoth flying boat down in the Atlantic Ocean.

After making a successful water landing, the crew of the airplane still faced an emergency situation in the form of the still burning engine. Immediately, the men formed a human chain, passing buckets of saltwater to the wing and extinguishing the flame. In the meantime, the destroyer Abbott (DD 629), which had been participating in the recently concluded exercises, steamed towards the plane’s location. Taxiing alongside the tin can, the airplane covered a distance of some 200 miles to the waters off Grand Turk Island in the British West Indies, where it met the seaplane tender Albermarle (AV 5). A clipped jargon of a dispatch from the ship indicated that there was no way the P5M-2’s crew were making it home by air. “INSPECTION OF P5M REVEALS SUBSTANTIAL BURN DAMAGE TO STARBOARD NACELLE AREA AND METAL STRENGTH MEMBER X PROBABLY HEAT DAMAGE TO MAIN SPAR X AM REFUELING AND PROVISIONING AIRCRAFT FOR ESCORT OR TOW TO GITMO [Guantanamo Bay, Cuba].” 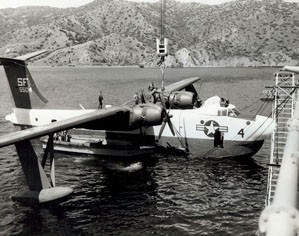 With the “boat” in the “flying boat” classification now the most accurate description of their aircraft, the crew settled in for a cruise home. With their P5M refueled and provisioned, all of them decided to remain on board for the ride to Gitmo, leaving the airplane they nicknamed the “Caribbean Cruiser” for showers and hot meals on board Albermarle. With part of the nearly three day trip, during which the P5M taxied at an average of 10 knots, occurring on a Sunday, the crew even celebrated Sunday worship on board their airplane, theAlbermarle‘s services piped aboard via radio. Finally, after taxiing a distance of over 550 miles, what began as a flight ended with the the P5M-2 arriving at Guantanamo Bay, with Albermarle radioing the epitaph to the experience. “500 MILES OF SEA STATE ONE, A TAXI RECORD ONCE BEHUN, SINGLE ENGINE TO GTMO VIA P5M, NOW THIS IS THE FINAL SITREP 10.”

When submitting this story, Bob Deland, co-pilot on the flight, concluded of the experience, “It went our in a blaze of glory, but it transported the 13 of us to Gitmo as well as any luxury liner.”