posted in FROM THE COCKPIT: STORIES OF NAVAL AVIATION on March 07, 2012

On 7 March 1921, an outwardly unlikely candidate assumed the post of Director of Naval Aviation. Flying was a distinctly young man’s profession, yet the gray haired officer tasked with leading the Navy’s air arm was a product of the nineteenth century, having graduated from the Naval Academy in 1890. His professional breeding came in the era of the battleship, which was the queen of the seas in the world’s navies of the time. Moffett himself had once told a young aviator named John Towers that anyone who went up in an airplane was either crazy or foolish. 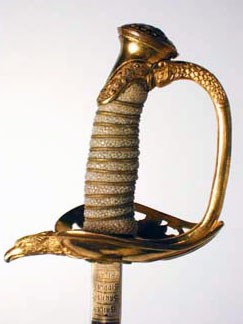 Yet, beneath the surface Moffett proved an inspired choice. He brought to the position a certain stature, having received the Medal of Honor for actions during the Vera Cruz Insurrection in 1914. By 1921, he had also developed an open mind with respect to the potential of the airplane in naval tactics. While in command of the Naval Training Station at Great Lakes, Illinois, during World War I, he instituted a flight training program and established schools for aviation ratings, including mechanics, armorers, and quartermasters. Following the war, he commanded the battleship Mississippi (BB 41) during winter maneuvers off Guantanamo Bay, Cuba, his ship featuring a makeshift wooden deck built atop a gun turret. From this platform, naval aviators experimented with operating wheeled aircraft from a ship, laying the foundation for the commissioning of the U.S. Navy’s first aircraft carrier in 1922.

Moffett was destined to hold the office of Director of Naval Aviation for just a few months. In July 1921 an Act of Congress created the Bureau of Aeronautics to manage all aspects relating to naval aviation and not surprisingly, Moffett was named the first Chief of the Bureau of Aeronautics and promoted to the rank of rear admiral. It was a post he was destined to hold for twelve years, during which he fostered the development of naval aviation into a viable arm of he fleet, putting into action his words, “naval aviation must go to sea on the back of the fleet… the fleet and naval aviation are one and inseparable.” 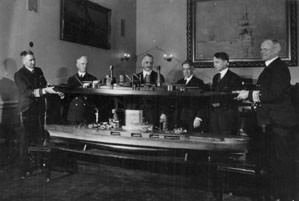 Moffett displayed an array of talents during his tenure as Chief of the Bureau of Aeronautics. A skilled politician and savvy in public relations, he was comfortable walking the halls of Congress and also cultivating contacts inside and outside the Navy to promote naval aviation. Moffett was also tough-minded as evidenced by his battles with the flamboyant Army airman Billy Mitchell in the latter’s quest for an independent air force and in interservice squabbles with chiefs of other Navy bureaus whose policies affected naval aviation.

Under Moffett’s leadership, naval aviation expanded exponentially, with aircraft carriers joining the fleet and demonstrating offensive capabilities in fleet exercises. Moffett established ties with the aviation industry, resulting in the steady introduction of new and more capable types of aircraft, even amidst the first years of the Great Depression. Under Moffett’s direction, more senior officers were brought into the ranks of naval aviation through the creation of the naval aviation observer designation, with Moffett becoming the first to complete the qualification course at Naval Air Station (NAS) Pensacola, Florida. 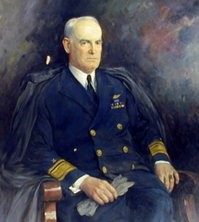 Perhaps Moffett’s most visible legacy was his embracing of lighter-than-air operations, particularly the commissioning of giant rigid airships for use as long-range scouts. His dogmatic support for the ill-fated program brought criticism from some quarters inside the Navy and ultimately, it was on a flight aboard the dirigible Akron (ZRS 4) that he lost his life on 4 April 1933, when she plunged into the Atlantic Ocean during a storm.

The rare officer who made his mark as a warrior and administrator, Moffett indeed earned his title as the “Father of Naval Aviation.”

Pictured on this page are the handle and hilt of a dress sword presented to William A. Moffett by the crew of the battleship Mississippi (BB 41) on the occassion of his departure from the ship. Rear Admiral Moffett (second from left) stands with Navy and congressional officials as they observe models of showing how planned battle cruisers will be converted into the aircraft carriers Lexington (CV 2) and Saratoga (CV 3). A formal portrait of Rear Admiral Moffett painted during his tenure as Chief of the Bureau of Aeronautics. Note the Medal of Honor ribbon beneath his wings.