posted in AIRCRAFT IN THE SPOTLIGHT on February 13, 2013

The implications of the new era in warfare introduced when atomic bombs fell on Japan in August 1945, were felt almost immediately in the ranks of naval aviation, which emerged from World War II having assumed a dominant role in fleet operations. The platform of the aircraft carrier, with its inherent mobility, proved ideally suited to the Pacific campaign, which was characterized by assaults against widely dispersed islands. However, in the immediate postwar years, air power advocates in the Army Air Forces (which became the U.S. Air Force in 1947) campaigned on the fact that atomic bomb had negated the need for large land armies and vast fleets of ships. Heavy bombers carrying nuclear weapons, they argued, would wage wars of the future, and thus all air power should be concentrated under the auspices of an independent air force. Countering with the argument that naval aviation did have a role, the Navy set about finding a platform to turn their words into reality. Their answer was an aircraft that proved one of the most versatile ever to fly from a carrier—the A3D/A-3 Skywarrior. 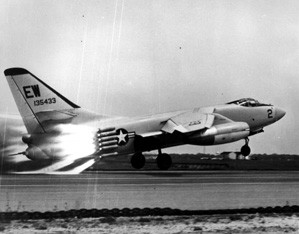 In 1947, Douglas Aircraft Company responded to a U.S. Navy Request for Proposals to build a jet-powered bomber capable of carrying a 10,000 lb. atomic bomb and delivering it on a target at a distance of 2,000 nautical miles. The new aircraft was intended for use on board the Navy’s planned super carrier United States. Under the supervision of famed designer Ed Heinemann, a stable of engineers set to work on an aircraft that in final form boasted a gross weight of 68,000 lb., 32,000 lb. less than the design proposal submitted by the competing manufacturer. The power plant consisted of two jet engines housed in nacelles, one under wings that were mounted atop the fuselage to make room for the internal bomb bay. On March 31, 1949, Douglas received a contract for two prototypes, though the carrier from which the bomber was intended to operate came to a sudden end twenty-three days later when construction on United States was cancelled by order of Secretary of Defense Louis Johnson.

Nevertheless, work proceeded on the aircraft, which in final form boasted two 9,700 lb. static thrust Pratt & Whitney J57-P-6 engines that provided a top speed of over 600 M.P.H. Ed Heinemann had made it a point to limit the aircraft’s weight wherever possible, allowing the Skywarrior to fly from modified World War II-era angled-deck Essex-class carriers. A downside to shedding pounds from the design was the elimination of ejection seats, the crew instead bailing out of the aircraft using an escape chute leading from the cockpit to the bottom of the fuselage. The inability to exit the aircraft quickly prompted Skywarrior crews to apply a nickname to the aircraft based on its designation. A3D, they swore, stood for “All Three Dead.” 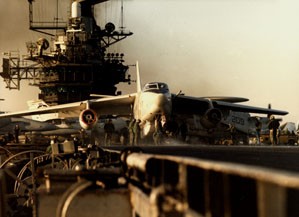 The first production A3D-1s were delivered to the fleet on March 31, 1956, just months after the Navy commissioned the aircraft carrier Forrestal (CVA 59), the first carrier designed to operate jet aircraft. The new aircraft demonstrated its capabilities almost immediately. On July 31, 1956, a Skywarrior logged a 3,200 mile nonstop, non-refueling flight from Hawaii to New Mexico in just 5 hours, 40 minutes, and the following year another pair of A3Ds flew a carrier to carrier transcontinental flight. This involved launching from Bon Homme Richard (CVA 19) off the coast of California and flying nonstop to a recovery on board Saratoga(CVA 60) steaming off the coast of Florida. The year 1957 also marked the first extended deployment of the A3D on board Forrestal. It was a high point for the Navy as its most modern attack aircraft went to sea on board the service’s first super carrier. The Skywarrior immediately established its worth to the fleet. Vice Admiral Charles R. ‘Cat’ Brown, Commander Sixth Fleet, indicated his desire to operate more than twelve Skywarriors on board Forrestal-class carriers because of the aircraft’s range and capacity for a heavy ordnance load of multiple small atomic weapons. In the event of war and threats to the fleet, Brown asserted in a May 1957 letter to his friend Vice Admiral Bob Goldthwaite, ‘We must…strike at the source of the threat to our survival. At the moment…the A3D can do this best.’

A new decade brought the beginning of the end of the Skywarrior’s career at the tip of the nuclear spear. On July 20, 1960,George Washington (SSBN 598) launched the first Polaris missiles, foreshadowing the shifting of the Navy’s component of the nuclear triad to submarines. A3Ds began the gradual movement towards other missions that included aerial refueling, which kept Skywarrior crews busy flying from carriers operating on Yankee Station during the Vietnam War, their value counted in lives saved as A3Ds nursed many a damaged strike aircraft back to its carrier. Other missions included photoreconnaissance in the Cuban Missile Crisis and over Southeast Asia, missions in Vietnam flown at night using infrared to peer at the enemy’s network of road. Skywarriors converted to the electronic countermeasures role remained in service into the 1980s. 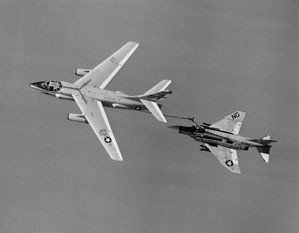 The A3D/A-3 ended its tailhook career in 1987 after thirty-two years of continuous operations from U.S. Navy carriers. According to Ed Heinemann, the Skywarrior represented proof that ‘there are occasions when what the majority say is impossible can be made possible.’ The aircraft defied those who said a heavy attack plane weighing less than 100,000 lb. could not be built. It then became the heaviest aircraft to routinely perform an evolution that was inherently not routine—landing on an aircraft carrier—and did so for over three decades. And most importantly it was able to adapt over time, serving as the tip of carrier aviation’s atomic spear and then performing tanker and electronic reconnaissance duties. This was revealed in 1972 when, during a tour of John F. Kennedy (CVA 67), a scientist remarked on what he took to be one of the Navy’s more modern aircraft. Heinemann replied with a laugh. “That sir, is a Skywarrior. We started work on it in 1948.” Such was the long and distinguished life of the plane known universally in naval aviation as the “Whale.”