In February 1911, pioneer aviator and airplane manufacturer Glenn H. Curtiss began testing a new hydroaeroplane over North Island, situated amid the waters of San Diego Bay. The island’s hardscrabble landscape was the site of Curtiss’ winter encampment where he could carry out testing of his newest designs in a more hospitable climate than his Hammondsport, New York, home. Earlier that month, he had modified his D Hydro with a tractor engine, in which the engine and propeller were positioned in front of the pilot. This contrasted with the pusher configuration in which the engine was located behind the pilot and the propeller faced to the rear of the airplane. In this machine, he had flown out to the armored cruiser Pennsylvania (ACR 4), demonstrating that a seaplane could land alongside a ship, be hoisted aboard, and then lowered from the ship to the water for take-off. This, more than Eugene Ely’s landmark flights in a wheeled aircraft from temporary flight decks constructed on two armored cruisers in November 1910 and January 1911, was critical in selling the Navy on aviation.

The tractor engine configuration proved problematic in that it restricted forward visibility and exposed the pilot to propeller blast and sprayed him with oil when in operation. To this end, Curtiss returned to the pusher engine for his next hydroaeroplane, also adding retractable landing gear, which gave the plane the ability to operate in three dimensions—sea, air, and land. This inspired the name “Triad,” and Curtiss’ flights in the airplane highlighted the potential of aviation. “A further demonstration was given to-day (sic) of the adaptability of the aeroplane for land and water service,” reported the New York Times that February. “In a flight of six miles over the bay and ocean and across Coronado Island, Glenn H. Curtiss rose from the water, alighted on land, and then started from the land and alighted on the water.”

This Triad laid the foundation for the A-1 Triad, which later in 1911 became the first airplane ever requisitioned by the U.S. Navy. With Curtiss at the controls, the A-1 made its maiden flights on July 1, 1911, at Hammondsport, the four hops that day including two in which the Navy’s first aviator, Lieutenant Theodore G. Ellyson, was at the controls. Ellyson would be intricately involved in the subsequent operations of the A-1, including flying the aircraft on what would be its last flight on October 16, 1912, when it was wrecked beyond repair, only the engine saved for future use. In between, he kept meticulous notes that provided insight into the A-1 and the early flights made in the first months of U.S. naval aviation’s existence.

The first impression one gets from reading Ellyson’s words is the fact that if someone enjoyed tinkering with engines, the A-1 would have provided plenty of work. Notes such as “Burnt out bearings on #5 and #6 connecting rods” and “#8 cylinder broke around base” are more the rule than the exception and it is little wonder that the first naval aviators had to know as much about how to fix an engine as they did the principles and procedures that went into actually flying the airplane. Such was the case on an October 11, 1911, flight from Old Point Comfort, Virginia, to Annapolis, Maryland, with Ellyson and Lieutenant John H. Towers flying the airplane. After fifteen minutes in the air, the pair made a forced landing when a safety wire on the gasoline tank broke. After taking a half hour to make repairs, they got the A-1 airborne only to make another forced landing after only twenty minutes in the air, this time when a part on the carburetor adjuster broke. Another period of time airborne ended with burned out crank bearings, the airplane landing at Smith’s Point, Virginia, after covering 79 miles in 85 minutes of flight time. This time, Ellyson and Towers disassembled the A-1 and it was loaded on board the torpedo boat Bailey, which had been dispatched from Annapolis to retrieve them. Two weeks later, they tried again, this time covering 112 miles in 122 minutes between Annapolis and Milford Haven, Virginia, before being forced down by a leaking radiator. That distance passed for a cross-country flight during that era!

The danger of flying became all too real for Lieutenant Towers on November 15, 1911. “After having been in the air three minutes, while making a left turn at an estimated altitude of 150 feet, the machine suddenly banked with wind under right wing, to an angle of about 45° and shot down towards the water,” read a summary detailing a flight from Annapolis. “The left wing struck first, Lt. Towers was thrown out, and the machine turned over. [He] sustained several minor cuts and bruises, a badly swollen face, and left leg and left ankle badly wrenched.” As for the A-1, the airplane was submerged except for the pontoon float, and had to be rebuilt.

The early naval aviators welcomed opportunities to show the A-1 to their contemporaries and the public, one of Ellyson’s notes revealing a flight “for the benefit of moving pictures machine. This company granted authority by Navy Department to take these pictures.” A planned flight around the fleet anchored near Annapolis during “June Week” when midshipman of the first class graduated, ended prematurely with a forced landing, Lieutenants Ellyson and Towers forced to taxi the airplane back to shore.

The brief career of the A-1 forms the first chapter of the more than century old history of aviation in the U.S. Navy. At the time he flew the airplane, Ellyson wrote that his journal “may be of value later on when I have forgotten what my first impressions were, and again in case anything should happen to me there will be something left for the next person that comes along.” Ellyson survived his time in the A-1, but ultimately died in the aftermath of an aircraft accident in 1928. By that time, many others had come along, the ranks of the Navy filled with the naval aviators that followed him and his fellow pioneers into service and integrated the airplane into fleet operations.

A-1 Triad on shore at North Island 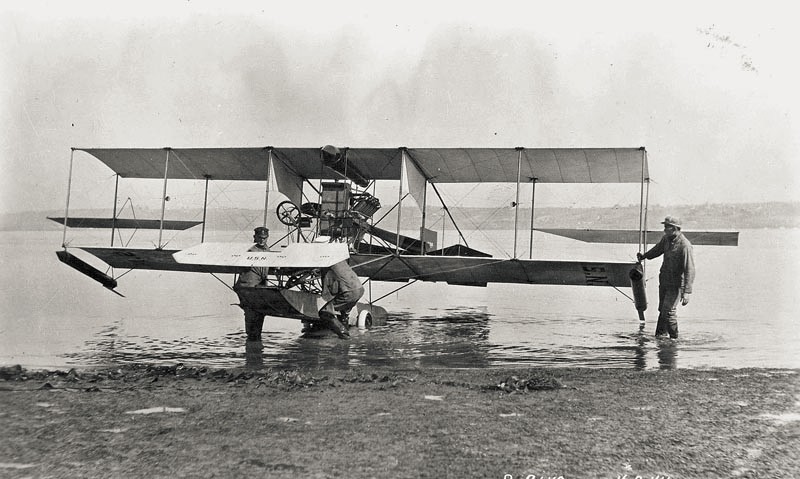 Sailors pull an A-1 Triad hydroaeroplane out of the water at the Curtiss camp on North Island, California.

A-1 Triad on Launching Wire 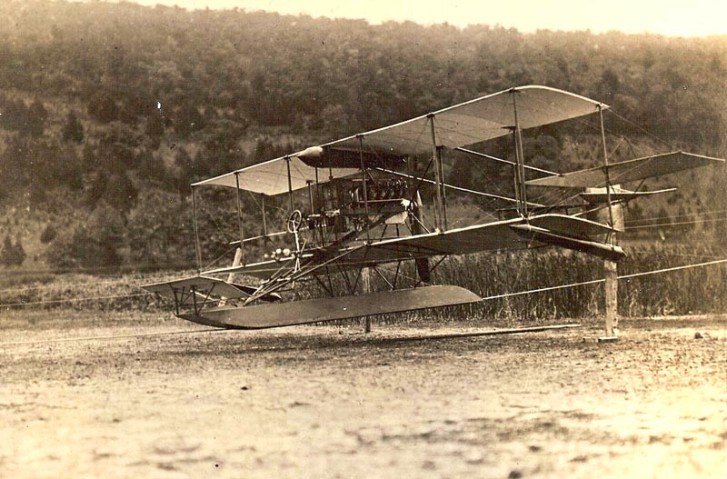 The A-1 Triad, the Navy's first airplane, pictured on a wire launch system under evaluation on the shores of Lake Keuka in Hammondsport, New York. These experiments marked early attempts to develop a method for aircraft to fly from U.S. Navy ships. 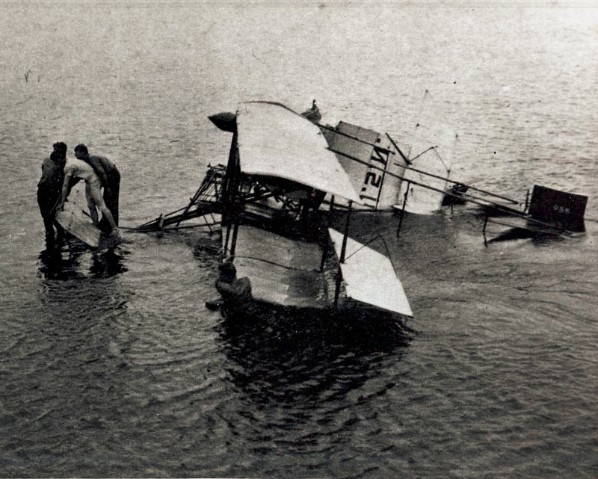 View of the aftermath of the Naval Constructor Holden Richardson's mishap in the A-1 Triad at San Diego, California, in April 1912.