posted in HISTORY UP CLOSE, UNCATEGORIZED on July 28, 2014 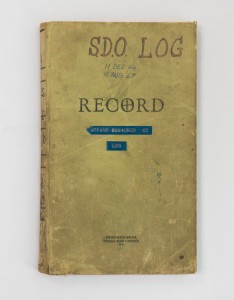 This squadron duty officer log for Attack Squadron (VA) 65 recorded activities of the squadron ashore and afloat, including the day of the fire on board the carrier Forrestal (CVA 59) off the coast of Vietnam on July 29, 1967.
Download

The government-issue record book like those that were once ubiquitous on board Navy ships is worn with age, frayed at the edges with circular imprints on the dirtied cover marking where coffee cups one sat during long days at sea. Writing on the cover points to its contents, the book having served as the Squadron Duty Officer Log for Attack Squadron (VA) 65. In most cases the pages are routine, with notations about musters, arrivals and detachments of personnel, and the occasional disciplinary action. The one exception is the entries for July 29, 1967.

The images from that day are enduring, the tails of aircraft framing flames protruding through billowing black smoke on the cover of LIFE magazine and the grainy footage of explosions that rocked the great ship, the latter shown to generations of sailors as part of the training to combat a fire at sea. The crew of the aircraft carrier Forrestal (CVA 59) was preparing to launch a strike against targets in North Vietnam when tragedy struck. A 5-inch Zuni rocket accidentally fired from an F-4B Phantom II fighter and slammed into a fully-armed A-4E Skyhawk, triggering cataclysmic explosions that left 134 crewmen dead and wounded 161 others.

In a ready room below, Lieutenant Ronald J. Zlatoper, who had assumed the duties of squadron duty officer at 0500, succinctly recorded the events of the day. The entries lack emotion, but are moving in their own way, the number of corrections made by crossing out words reflective of the tense atmosphere on board the ship that day.

The first word that something is wrong comes at 1100 with the entry, “Fire out of control on hangar flight deck. General quarters.” Five minutes later, Zlatoper records that six officers are on the flight deck, but three officers are unaccounted for. “Physically impossible to get muster of enlisted. All shops/spaces are abandoned.” 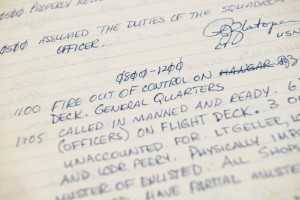 Entries in the squadron duty officer log for Attack Squadron (VA) 65 on the day of the fire on board the carrier Forrestal (CVA 59) off the coast of Vietnam, July 29, 1967.
Download

At 1201, the smoke and fire in the aft part of the ship necessitated evacuation of Ready Room Six and the movement of the squadron office to Ready Room Three. Thirteen minutes later, Zlatoper writes the words, “Magazine warning. Officers and SDO abandon Ready Room Three and moved forward and up to hangar deck.” This brought them closer to the scene of the conflagration on the flight deck, and subsequent entries report the ongoing attempts to muster squadron personnel and locate missing officers. The 1530 log entry reads, “Muster appears completed. One officer is dead of wounds received attempting to help on flight deck during fire. He is LT R.E. Geller…One enlisted man is dead, AME3 Gerald A. Wehde.” Additionally, three men were reported missing, one of them, PRAN Robert Fleming, picked up by a destroyer after jumping overboard when he became trapped by fire.” 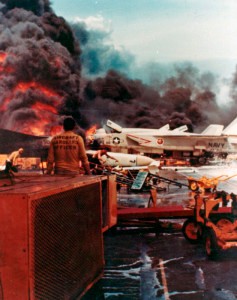 Black smoke rises from the flight deck of the carrier Forrestal (CVA 59) on the day of a disastrous fire on board the ship while she operated off the coast of Vietnam on July 29, 1967.
Download

Between 2000 and 2400, Zlatopter notes “Fires continue throughout this period and some threat is posed by poison gas. Crew’s berthing compartment is all right and situation is returning to some semblance of normality.”

Yet, for Lieutenant Zlatoper, who was destined to rise to the rank of admiral and command the U.S. Pacific Fleet, and all those on board Forrestal, it had been anything but a normal day, both in the tragedy that befell them and the inspirational devotion to duty that carried them through. This was captured in the words of the Plan of the Day posted on July 30th. “Forrestal’s crew members have performed their duties with valor and courage. Through the day, men’s lives have been saved and a gigantic fire has been fought in spaces filled with hot steam, smoke and sufficating (sic) fumes. Some of our brave comrades are in the eternal care of a righteous God. We thank God that He has much for us to do and the opportunity to clean and repair our ship, learning from this experience to carry our responsibilities even more effectively.”