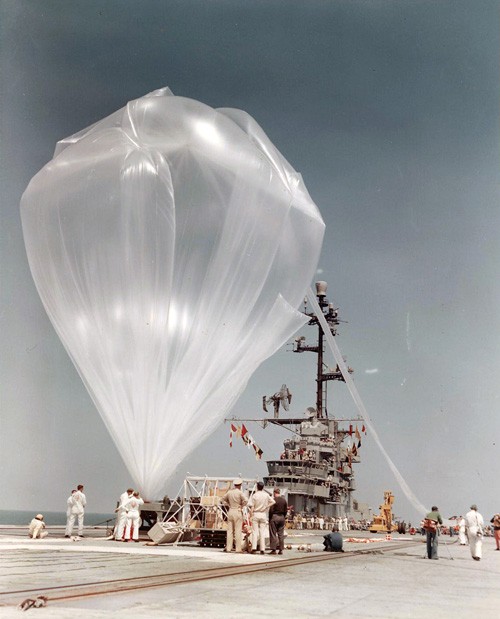 In May 1961, a stratospheric balloon rose to dizzying heights on the eve of astronaut Alan Shepard’s blasting into space in the first flight of Project Mercury.  Not surprisingly, Shepard’s suborbital flight captured the headlines, supplanting the high-altitude balloon flight in the nation’s conscience, yet the latter was a notable event in naval aviation history.

On May 4, 1961, the aircraft carrier Antietam(CVS 36), whose normal cruises involved carrier qualifying flight students, steamed in the Gulf of Mexico with her flight deck devoid of the training aircraft. Instead, positioned on the deck was a silver gondola in the shape of a cube, its sides consisting of adjustable Venetian blinds that one might find on household windows that could be adjusted to regulate the gondola temperature. Inside were seats for two crewmen, the equipment on board with them including a temperature sensor, cameras to record the flight, and a barometer for use in determining altitude. The crew of the flight included Commander Malcolm D. Ross and Lieutenant Commander Victor Prather, MC. A native of Illinois, Ross was a graduate of Purdue University, the same college that would produce Neil Armstrong and Eugene Cernan, the first and last men to walk on the moon. Entering the Navy during World War II, he served as an aerology officer in the carrier Saratoga (CV 3) until she was severely damage by kamikazes off Iwo Jima in 1945. A recall to active duty in the Korean War and assignment to the Office of Naval Research triggered a long association with the Navy stratospheric balloon program, where he became the sea service’s foremost balloonist, receiving the Harmon Trophy for a record-setting ascent to 76,000 ft. in 1956. Prather, who completed his medical degree at Tuft University, was a flight surgeon with service in the carrier Shangri- La (CVA 38) and at Naval Air Station (NAS) Pensacola, Florida. His main purpose on the flight was the testing and evaluation of the Mark IV pressure suit at high-altitude. 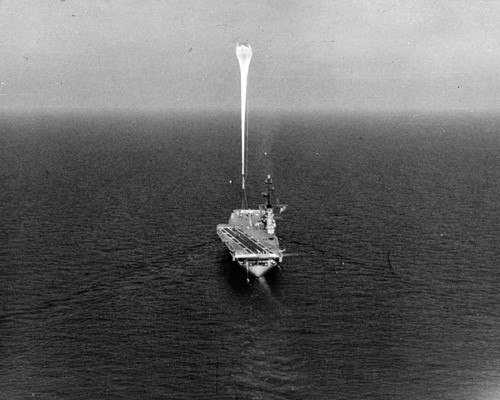 After manning the gondola, the 411 ft. long polyethylene balloon to which it was attached streamed skyward until at 7:08 am the Strato-Lab V left Antietam‘s deck and began the long ascent skyward. As they climbed higher, Ross and Prather were greeted with an amazing view of the entire Gulf Coast and even the Atlantic coast of Florida, more and more coming into their fields of vision with each foot of altitude. “Things are great. Come on up,” Prather responded over the radio when asked how the flight was proceeding. Finally, after 2 hours and 36 minutes airborne, Strato-Lab V reached 113,739.9 ft., a new world altitude record for balloons.

It took longer for the gondola to make its way back to Earth, with Ross and Prather opening the face plates of their flight helmets when they reached an altitude at which they could safely breathe without their oxygen systems. During the descent, they could be satisfied with the success of the flight, which demonstrated the soundness of the Mark IV design. After more than 9 hours in the air, the gondola splashed down in the Gulf of Mexico in the late afternoon, making a near perfect landing less than two miles from the carrier, rescue helicopters soon hovering above them ready to hoist them aboard. In the process, Prather fell backwards into the water, the open face shield on his helmet allowing water to flood into the suit, the added weight dragging him under. Despite the successful effort of a Navy frogman to pull him from the water and back into the gondola, Prather was pronounced dead on board Antietam, a victim of drowning.

It marked a tragic end to what had been a successful mission testing the bounds of high altitude flight in a way that contrasted sharply with the thunderous roar of Alan Shepard’s liftoff into outer space the following day. Ross and Prather received the Harmon Trophy from President John F. Kennedy, the posthumous award presented to the deceased flight surgeon’s widow. Ross, the veteran of so many of the Navy’s postwar balloon flights, never flew in one again.