The aircraft collection of the National Naval Aviation Museum is indeed world renowned, the airplanes on display including the only known surviving aircraft from the Battle of Midway, the first airplane to land at the South Pole, and three aircraft with ties to Presidents of the United States. One would expect the foundation of this collection a half century ago would have been storied Navy aircraft like the F6F Hellcat or F4U Corsair. Instead, the first airplane accessioned into the collection could fit into a small crate and cost the sizeable sum of just $230 to pack and ship from Akron, Ohio, to Pensacola, Florida. And another unique thing about it— it inflated! 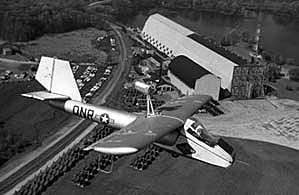 In 1955, the Goodyear Aerospace Corporation, which in an earlier era constructed a series of successful blimps and the rigid airships Akron (ZRS 4) and Macon (ZRS 5) for the Navy, introduced the first of what would become twelve “Inflatoplanes.” Measuring just over 19 ft. in length with a 28 ft. wingspan, the aircraft could be inflated in just six minutes and was powered by a 60 horsepower engine. With a 20 gallon fuel tank, it could fly for over 5 hours without refueling with a top speed of 60 knots. Goodyear trumpeted the aircraft’s capabilities as a rescue platform that could be dropped to downed pilots behind enemy lines, where they could assemble it and fly it to safety with its short take off capability. With their ability to be packaged and stored away with minimal maintenance requirements, the Inflatoplanes in the words of company literature were “‘cocked and ready’ for quick delivery by aircraft to any point in the globe.” Interestingly, Goodyear would later marketed the Inflatoplane’s potential as a remotely piloted vehicle (RPV), forerunner to the unmanned aerial vehicles (UAV) of the modern battlefield.Designed and built by Goodyear in just twelve weeks, the Inflatoplane was evaluated by both the Army and Navy, a photograph of one painted with the letters “ONR” for Office of Naval Research pictured in an issue of Naval Aviation News magazine showing it equipped with a hydro-ski to allow it to operated from water. However, the services ultimately did not buy it, which was the reason behind the letter sent by the Office of Naval Research to the Chief of Naval Operations indicating that an Inflatoplane was available for historical display. The letter was dated June 4, 1963, just four days before the opening of a small institution known as the U.S. Naval Aviation Museum on board Naval Air Station (NAS) Pensacola, Florida. Ironically, the day before the museum even opened its doors, the Curator of the Navy responded to the letter from the Office of Naval Research and requested that the museum coordinate with ONR for transfer of the Inflatoplane to the museum. It is humorous to note given the size of the museum today that the director at the time, Captain James H. McCurtain, was careful to inquire about the cost of shipment, his new command [McCurtain was an active duty officer with the title of officer-in-charge of the museum] needing to maintain “close control over museum obligations and expenditures.”

ONR picked up the tab for delivery and the Inflatoplane arrived in September 1963, the first airplane in the museum collection. Since that time it has been inflated on occasion, but never placed on display, the arrival on its heels of such airplanes as the N3N “Yellow Peril,” F8F Bearcat, and F9F Panther drawing more attention and deemed more display worthy. One other thing about the Inflatoplane was likely the deciding factor in keeping it out of the public eye for the example that was available to the museum was not the one in ONR markings; the first airplane arriving at the Navy’s official museum for naval aviation instead marked “Army” on the tail!