For most of its history, the Medal of Honor has recognized actions against the enemy on a battlefield, the criteria that exists today. However, for a period of time the Navy awarded the medal to individual sailors for peacetime heroism as well. One such action occurred in Pensacola Bay on September 25, 1918, during World War I, when flight training activities at the air station operated at a fevered pitch preparing personnel for service overseas. Unfortunately, accidents were all too frequent, a wailing siren announcing the fact that another seaplane had plunged into the water. 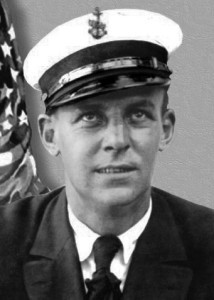 That morning, Ensign Thomas C. McCarthy and Electrician’s Mate Third Class Paul B. Parsons were conducting a training flight in an N-9 when the seaplane went into a tailspin and crashed into the bay. Airborne at the time was another N-9 flown by Ensign John A. Jova with Chief Machinist’s Mate Francis Ormsbee as a passenger, their airplane flying less than a mile from the crash site. Landing his airplane on the water as quickly as possible, Jova taxied to the wreckage of McCarthy’s airplane, at which point Ormsbee unhesitatingly jumped into the water. With only the wingtip floats of the N-9 remaining above the surface, he made repeated dives into the twisted wreckage, cutting his hands in the process, and managed to extricate Parsons enough to hold his head above water until a crash boat arrived. He then made numerous, but ultimately futile attempts to save the life of McCarthy, who was pronounced dead by drowning.

Two months later, Ormsbee received the Medal of Honor for his actions. The Rhode Islander eventually learned to fly, receiving his wings of gold as the Navy’s 25th naval aviation pilot, the designation then given to enlisted men who completed the flight training program. When he left the Navy, he did not leave flying behind, joining Pan American Airways, where he flew mail and passengers, accompanying Charles Lindbergh in his survey of Central and South America preparatory to establishing Pan Am routes to that part of the world, routes that Ormsbee flew repeatedly. Joining the Department of Commerce as an inspector of air navigation, the Medal of Honor recipient lost his life when his plane crashed while flying from Washington D.C. to Ft. Worth, Texas. Ironically, his brother, Army Second Lieutenant Harry Selfridge Ormsbee, had also lost his life in an aircraft accident in 1919.

Other future Medal of Honor recipients would pass through Pensacola for flight training en route to the hostile skies in which they performed heroic deeds, flying over waters where one of their predecessors performed a valiant act of heroism to save the life of a fellow sailor.