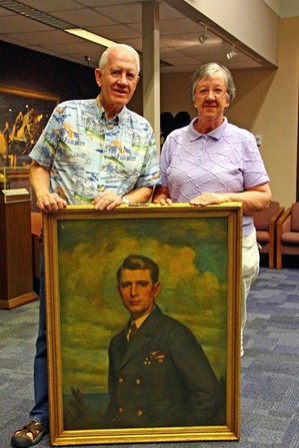 It has been 94 years since the Navy-Curtiss NC-4 flying boat became the first airplane to cross the Atlantic Ocean, splashing into the waters of Lisbon Bay in Portugal to complete the epic journey on May 27, 1919. Fifty years later, the Smithsonian National Air and Space Museum restored the airplane and placed it on display on the National Mall in commemoration of its signature achievement and in 1974 the flying board arrived at Naval Air Station (NAS) Pensacola to become a centerpiece of the then Naval Aviation Museum’s newly opened building. It has been here ever since, on loan to the museum from the Smithsonian Institution.

No visitor to the museum can miss the NC-4 with its sprawling wing span and unique design, but on Wednesday, October 30th, a group of siblings definitely had more than a passing interest given the fact that their great uncle, Lieutenant (junior grade) Walter Hinton, had served as the airplane’s co-pilot on the flight across the Atlantic. The offspring of Hinton’s sister, they marveled at the accomplishments of their relative and enjoyed looking at the medals and decorations that he received for the transatlantic flight as well as his aerial mapping expedition of the Amazon River in Brazil as part of the Rice Scientific Expedition in 1924–1925. Hinton, the last surviving member of the NC-4’s crew,  died in 1981.  He left many of his papers and decorations with the museum, including a portrait of him from his flying days, which Marilynn Slade and her brother Lumon proudly posed with during their visit (their brother, who also visited the airplane, is not pictured).