posted in AIRCRAFT IN THE SPOTLIGHT on September 20, 2013 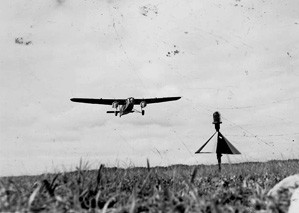 In the United States the concept of transporting people around the country via air took time to capture the imagination of the American public. That it could even be possible was a testament to the intrepid mail pilots, one of them Charles Lindbergh, and their success in transporting letters and packages over long distances, including night flights aided by beacons erected along their routes. By the mid 1920s, these beacons lighted a path from New York to San Francisco. The success of the airmail program prompted the decision to allow the U.S. Post Office to contract private companies to broaden the network of routes, with some of the winning companies laying the groundwork for modern air transport.

The first people to travel by commercial air did so in small aircraft hardly suited for the purpose, which required them to actually don helmets, goggles, and heavy coats like those worn by pilots and sit precariously in folding chairs in the same compartment as the mail! It was only a matter of time before aircraft manufacturers began developing aircraft designed specifically for passenger transport. In the United States the effort came from a familiar figure to the average American. Henry Ford, maker of the first mass-produced automobile, the famed “Model T,” was also fascinated by aircraft. In 1909, just six years after the Wright Brothers first flew, he joined his son in constructing an aircraft powered by the engine from one of his company’s automobiles. Ever the astute businessman, he looked for an opportunity to enter the aviation business, agreeing to help finance inventor William B. Stout in his effort to build a revolutionary all-metal monoplane. Eventually, Ford bought out Stout, and made his aircraft business a division of Ford Motor Company. In addition, he inaugurated the Ford Air Transport Service to carry parts between factories, and opened the Ford Airport at Dearborn, Michigan. Through “Reliability Tours,” in which aircraft took off from Ford Airport and traveled great distances to other cities, he fostered public confidence in the reliability of air travel. Yet, it would be Stout’s aircraft design, perfected by Ford engineers, which did more than anything else to foster commercial air travel in the United States.

In an age where wood and fabric remained standard components in construction, the aircraft that became the Ford Tri-Motor was out of the ordinary. Built entirely of “Alclad” alloy, which was resistant to corrosion, the aircraft quickly received the moniker “Tin Goose” and at the time was the largest all-metal aircraft built in America. It featured comfortable accommodations for passengers of the day, including wicker and later leather chairs, and the large windows that lined the fuselage offered travelers excellent visibility of the landscape below. 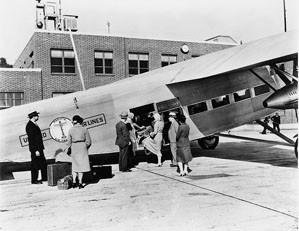 The first Tri-Motor was manufactured by Ford in 1926 and the aircraft quickly found a home with the upstart airlines, one of which was Transcontinental Air Transport (TAT), which began operating in 1929, and in concert with the Pennsylvania and Santa Fe Railroads, offered a combination air/rail package that could transport people across the country in just 48 hours. This service lasted only sixteen months, but TAT eventually merged with another airline to form TWA, which joined Eastern, United, and American as the major carriers. Interestingly, one of the leading test pilots for TWA was Daniel W. Tomlinson, a naval aviator who formed the famous “Three Sea Hawks” aerial exhibition team while he was a pilot in Fighting Squadron (VF) 2 during the mid-1920s. Another naval aviator, Medal of Honor recipient Edward O. McDonnell, became a director of Pan Am.

The airlines were not the only entities interested in the Tri-Motor. One flew as part of the Inman Brothers Flying Circus, while another supported the film industry, flying in the movie Only Angels Have Wings, starring Cary Grant and Rita Hayworth. Others served as flying billboards, advertising a host of products ranging from tires to coffee. In addition, a number of Central and South American countries joined the United Kingdom, the Netherlands, and Spain in procuring Tri-Motors. When Commander Richard E. Byrd began searching for an aircraft to support his 1929 expedition to the Antarctic, he looked no further than the Tri-Motor, replacing the original 220-horsepower Wright Cyclone engine in the nose with a more powerful 525-horsepower Wright Cyclone to enable the aircraft to make it over a 10,500-foot mountain pass. It was in this ski-equipped aircraft, nicknamed Floyd Bennett after Byrd’s pilot on his 1926 Arctic expedition, that Byrd and his crew became the first to fly over the South Pole. 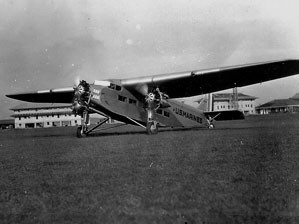 The Navy placed its first contract for one of the aircraft on March 9, 1927, and received the fourth Tri-Motor to roll off the Ford assembly line, designating it the XJR-1. Subsequently, the service ordered eight more improved versions of the Tri-Motor, including two JR-2s, three JR-3s, one RR-4 (after the Navy designation for transport changed from “J” to “R”) and two RR-5s. Of this number, five went to the Marines. The Army Air Corps ordered an additional thirteen Tri-Motors from Ford, completing the military use of the type.

In Navy service the Tri-Motor served essentially the same purpose as those flying for civilian airlines, though the Navy did conduct testing on a float-equipped version for possible use as a torpedo-bomber. Aircraft transported personnel between bases ranging from Anacostia to Pensacola to San Diego. One JR-3 was equipped with G.A. Aircraft Radio Equipment and used by the Secretary of the Navy on his periodic inspection trips of naval facilities. Service with the Marine Corps saw the aircraft on the front lines with leathernecks fighting in Nicaragua. Flying in Utility Squadron (VJ) 6M, its inherent ruggedness and ability to operate from short, makeshift runways proved essential to providing logistical support to Marines on the ground. The last of the Tri-Motors in naval aviation were stricken in 1937.

Even after more capable types supplanted them, Tri-Motors continued to fly with small airlines at home and abroad and also supported firefighting efforts in the western United States. Today, a number remain on the active civil registry of the Federal Aeronautics Administration, almost eighty years after the first Tri-Motor was produced.