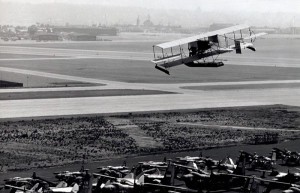 A flying replica of the U.S. Navy's first airplane, the A-1 Triad, pictured in flight over Naval Air Station (NAS) North Island, California, in 1961
Download

In 1957, the Navy and Institute of Aerospace Sciences began joint planning for events to commemorate the fiftieth anniversary of U.S. Naval Aviation.  One of the ideas that emerged was the building of a replica of the A-1 Triad, the first aircraft procured by the Navy.  With no permanent drawings of the aircraft—manufacturer Glenn Curtiss purportedly made drawings on the wooden wall of his primitive factory using a carpenter’s pencil and whitewashed the walls after the airplane was completed—he Navy turned to Alfred E. Verville, a Bureau of Weapons engineer who once worked for Curtiss. A tireless researcher, he uncovered photographs and technical details of the A-1, producing a three-view from which engineering blueprints were developed.

A team of engineers from the Navy and aircraft manufacturers Convair and Ryan developed detailed plans for the construction of two A-1s, one a flying reproduction and the other meant for static display at the Smithsonian’s National Air Museum (later renamed National Air and Space Museum) in Washington D.C.  A network of craftsmen around San Diego then set to work manufacturing components, though in some instances materials used were different from that Curtiss employed in building the original.  Metal replaced bamboo in the tail booms and laminated ash instead of spruce was employed in the wing spars.  However, great care was taken to not change the overall appearance that made the replicas true to the original A-1.  Final assembly on both replicas occurred at the Overhaul & Repair facility at Naval Air Station (NAS) North Island, California. 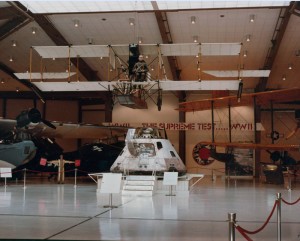 The replica A-1 Triad has long been a fixture on display at the National Naval Aviation Museum.
Download

On August 19–20, 1961, both A-1s participated in ceremonies the 50thanniversary commemorations at NAS North Island.  The non-flying Triad, which was still in the assembly shop, provided visitors the opportunity to see the construction techniques for early naval aircraft, while the flying replica took to the skies over San Diego Bay just as Glenn Curtiss and early naval aviators Lieutenants Theodore G. Ellyson and John H. Towers had a half century earlier.  Commented Alfred Verville, “The A-1 exemplifies for all time the great pioneering effort of our illustrious military and civilian flyers and designers.”

At the conclusion of the ceremonies, the flying A-1 remained in San Diego while the static display airplane transported across the country.  The former airplane, which was ultimately displayed at the San Diego Aerospace Museum, was destroyed in a fire at the facility in 1978.  The latter eventually made its way to the then-U.S. Naval Aviation Museum in Pensacola in 1968, where it was displayed on loan from the Smithsonian Institution.  In 1992, having been deaccessioned by the Smithsonian, the A-1 Triad became a permanent part of the National Naval Aviation Museum’s collection, representing the era when the U.S. Navy first took flight.