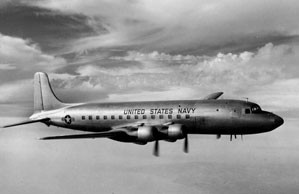 Another in the long line of Douglas civilian air transports procured by the armed forces, the R6D (all Navy R6Ds were redesignated C-118s in 1962) bore a family resemblance to its predecessors and possessed the same reliability. Procured mainly for service in the Military Air Transport Service, the first C-118 to wear the stars and bars was assigned to the U.S. Air Force in July 1947, for use as the official aircraft for President Harry S. Truman and christened Independence. The Navy took delivery of 65 production aircraft between 1950 and 1952, operating the type as logistics transports with the Military Air Transport Service (MATS) and in the VIP transport role.Serving into the 1980s, the aircraft was tragically involved in three deadly accidents during its service life in the Navy. In 1955, an R6D crashed northwest of Honolulu with the loss of sixty-six lives – the worst heavier-than-air crash in the history of U.S. naval aviation. A year later an R6D disappeared over the Atlantic with the loss of fifty-nine passengers and crew. Finally, in 1960, a Liftmaster carrying members of the Navy Band and a team of anti-submarine specialists collided with a Brazilian airliner. The accident took the lives of all twenty-six people on board the airliner, and all but three of the thirty-eight men on board the R6D were killed. 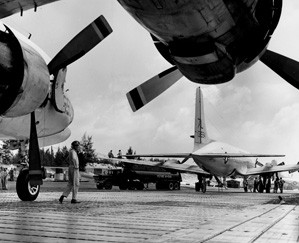 The Liftmaster was well known to Naval Air Reserve pilots, who often flew them on their weekend training flights. In 1965, these weekend flights assumed a level of greater importance as the pilots and crews began flying volunteer airlift missions in support of operations in Vietnam. From their home bases they flew to the West Coast, Hawaii, and on to Southeast Asia, delivering key personnel and important cargo to the combat zone. These volunteer weekend warriors logged 19,000 hours of flight time in the first eighteen months of the operation.

Interesting, during the more than three decades of service to the U.S. military, some aircraft were transferred between the Navy and Air Force, logging hours in both services. The last Navy R6Ds were retired from active service in the early 1980s.