Flying boats operated as an important element of naval aviation during its early history. This necessitated seaplane tenders and the Navy procured a number of these type vessels.  Curtiss (AV 4), commissioned #OTD in 1940, was among them and named after  Glenn Curtiss.   The pioneer aircraft manufacturer built the first seaplanes procured by the Navy. 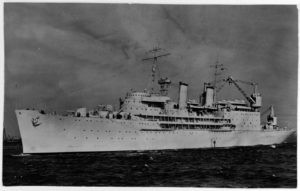 Curtiss (AV 4) steamed to the Pacific in May 1941.   Throughout the summer she supported flying boats operating out of Pearl Harbor. With war clouds on the horizon, she received orders to reinforce islands west of Hawaii, steaming to Wake Atoll in October-November 1941, carrying personnel and materials to bolster its defenses.

Curtiss returned to Pearl Harbor on the morning of December 7th. Her crew was carrying out their normal in port Sunday routine when Japanese aircraft appeared overhead. She sounded General Quarters at 0750 and thirteen minutes later her gunners fired their first shots at the attacking planes. Getting underway, her gunners continued hammering away at the enemy in the air and in the harbor waters, the seagoing target one of the midget submarines launched by the Japanese as part of their surprise attack. At 0905 her gunners found the range on a dive-bomber, setting it afire before it crashed onto the deck of Curtiss. The Japanese exacted their revenge a short time later, straddling the seaplane tender with bombs and scoring one hit, which caused fires that blazed until early afternoon. It also left 19 Curtiss sailors 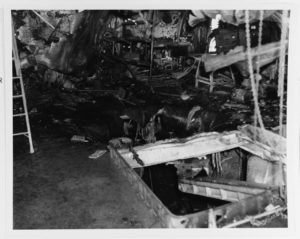 Hole in the main deck made by a Japanese 250 kilogram bomb that struck the ship during the Pearl Harbor raid, 7 December 1941.
Download

Seaman Second Class John Conzone, Jr., was just finishing breakfast when he looked out a porthole and got his first view of the attacking planes. Heading to his battle station in the aft engine room, where he served as the “talker” for the chief engineer, he remembered hearing the voice of an officer on the bridge saying, “We’re at war!”

The events on the date of infamy proved the beginning of extensive wartime service that took Curtiss to the Solomon Islands, where she served as the flagship for Commander, Aircraft, South Pacific Force. Those holding that command included Rear Admirals John S. McCain and Aubrey W. Fitch. Secretary of the Navy Frank Knox and Admirals Chester W. Nimitz and William F. Halsey, Jr. also visited the ship while she served as a flagship.

Supporting the Central Pacific offensive, Curtiss eventually deployed to the waters off Okinawa in May 1945. There, on June 21st, she endured another attack by enemy aircraft.  A kamikaze plunged into the ship, exploding on the third deck, killing 35 crewmen and wounding 21 others.  One of the survivors was John Conzone, now a chief petty officer, having spent the entire war on board Curtiss.  Lieutenant (junior grade) Henry Fonda also served in Curtiss during the war.  His time at sea in the seaplane tender as a junior officer certainly influenced his performance in the title role of the  motion picture Mr. Roberts.