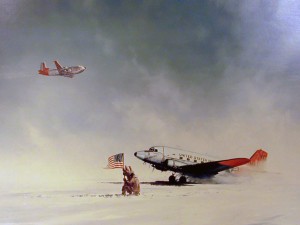 Over the course of history, humans have been drawn to exploring or conquering certain elements of our natural world, the crossing of the Atlantic Ocean or the scaling of Mt. Everest appealing to mankind’s spirit of discovery. Among those areas on Earth that have long been the subject of fascination by adventurous spirits are the polar regions of the globe, the famous expeditions to the poles by the likes of Scott, Peary, Cook, Amundsen, and Shackleton capturing the public’s imagination.

The advent of powered flight took exploration of these areas to a new dimension, allowing coverage of greater distances over the vast, icy landscape. In naval aviation, the foremost explorer was Rear Admiral Richard E. Byrd, who before World War II claimed the distinction of being the first to fly over both the North and South Poles. In the postwar years he led Operation Highjump, furthering his prewar explorations of the inland areas with the charting of much of the coastline of Antarctica. In 1955, the Navy began support of the International Geophysical Year (IGY), a collaborative international scientific study in Antarctica, the naval support carried out under the banner of Operation Deep Freeze.

Deep Freeze I commenced with the goal of establishing bases of operations for support of the scientific work of the IGY (1957-1958). To accomplish this feat, the Navy mobilized ships, aircraft, and personnel into Task Force 43, which put to sea from Christchurch, New Zealand, in 1955, and set course for the waters of the Ross Sea and a landing on the shores of Antarctica in December. They established Naval Air Facility (NAF) McMurdo near a spot used as a camp by explorer Robert Scott in 1902 and also constructed Little America V, named after the camp originally established by Byrd during his 1928 expedition. 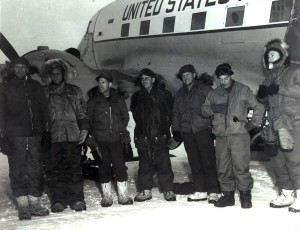 The crew of the R4D-5L Skytrain “Que Sera Sera” and Rear Admiral George Dufek pictured at the South Pole.
Download

At McMurdo the wintering over party (the coldest time in Antarctica coincides with warmer weather in the United States) spent the first part of 1956 preparing the station to support aircraft, work that included preparing a 6,000 ft. runway for aircraft that were vital to the success of the scientific initiatives of the IGY. By October it was ready for its first plane, an R4D Skytrain arriving in mid-October, its landing likened by veteran Navy polar pilot Commander William Hawkes to putting a plane down on “a bowling alley in somebody’s basement.” On board the aircraft was Rear Admiral George Dufek, the commander of the Navy’s operations in the Antarctic, his future plans calling for another landing in an R4D Skytrain on a truly historic spot.

On October 31, 1956, an R4D Skytrain nicknamed “Que Sera Sera,” which means “Whatever Will Be, Will Be,” took off from McMurdo and set course for the South Pole. Not since 1911–1912, when Norway’s Roald Amundsen and Great Britain’s Robert Scott reached the site respectively, had a human being left his footprints in the snow at the southernmost point on the globe. At the controls of the aircraft was Lieutenant Commander Conrad “Gus” Shinn, who well understood the perils of the flight he was making. On a previous mission seeking out a refueling spot between McMurdo and the South Pole, another R4D he was flying had gotten caught in a wind shear while flying into a valley, and almost crashed. 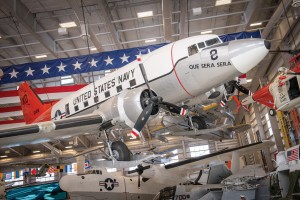 The R4D-5L Skytrain “Que Sera Sera” pictured on display in Hangar Bay One at the museum.
Download

Arriving over the South Pole after an 800 mile flight, Shinn made his approach, the touch down on the ski-equipped main gear a bumpy ride. Climbing out of the aircraft, Dufek later wrote, “was like stepping out into a new world. We stood in the center of a sea of snow and ice that extended beyond our vision…Bleak and desolate, it was a dead world, devoid of every vestige of life except us.” Just like astronauts would later do on the desolate landscape of the Moon, the party planted an American flag in the ice and, after withstanding 49 minutes in the biting cold, climbed back aboard the “Que Sera Sera,” its engines having remained running to prevent them from freezing up.

Pushing the throttles forward, Shinn found that the plane did not budge, its skis frozen in the ice. He triggered Jet Assisted Take Off (JATO) bottles to free the plane and assist it into the air, a process made difficult because with the pole nearly 10,000 ft. above sea level, the engines were starved of oxygen and the air was thin and hence did not provide much lift for the wings. Fortunately, Shinn managed to get the plane airborne and successfully return to NAF McMurdo, the flight of the “Que Sera Sera” bringing the Navy crew the distinction of being the first Americans to set foot at the South Pole.