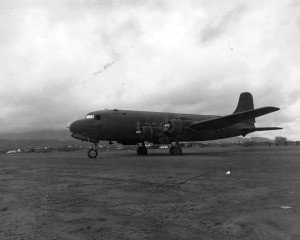 An R5D Skymaster assigned to Transport Squadron (VR) 1 pictured operating in the European Theater in 1944.
Download

On December 12, 1941, the battleships of the U.S. Pacific Fleet lay in ruin in the oil stained waters of Pearl Harbor and Japanese forces were on the offensive from the sands of Wake Atoll to the Philippine Islands. With the Navy confronting the specter of a prolonged war waged over thousands of miles of ocean waters, on that day the Navy took a major step in assembling the logistical framework for the upcoming campaigns by establishing the Naval Air Transport Service (NATS).

Naval aircraft had long been used for logistics, whether supporting Marine expeditionary operations in Central America or Rear Admiral Richard E. Byrd’s polar expeditions, but not until the creation of NATS were operations carrying personnel, equipment, and cargo given such a sizeable footprint in naval aviation. The creation of NATS spawned the establishment of the first Transport Squadrons (VR), with VR-1, the first of thirteen squadrons of its type to fly with NATS during World War II, established on March 9, 1942.

In carrying out their flights transport crews certainly benefitted from the advancement in the airline industry that had occurred during the years before World War II, the Pan American clippers having pioneered transoceanic air travel and aircraft manufacturers having produced a series of increasingly capable aircraft. Among them was Douglas Aircraft Company, whose DC-3 made its first flight on December 17, 1935, and soon equipped the major U.S. airlines. One of the most successful aircraft ever built, the DC-3 had a top speed of 192 M.P.H. and a range of 1.495 miles. The Navy procured the first of 568 DC-3s in 1941, designating them R4D Skytrains, and also accepted delivery of over 200 Douglas DC-4s, which were designated R5D Skymasters. These airplanes formed the backbone of NATS, which also included flying boats, notably PB2Y Coronados, the Martin Mars, and two of the famed Pan American clippers acquired for overseas transport flights.

It did not take long for NATS aircraft to begin reaching milestones, the first full year of operations bringing the command’s first transoceanic flight between Alameda, California, and Honolulu, Hawaii, as well as the inauguration of routes as far north as Iceland and into nations of South America. The following year, NATS R5Ds began flying to the British Isles, this route the avenue for one of the notable accomplishments of the war when transport planes delivered 150,000 lb. of vital minesweeping equipment that was vital to supporting Operation Overlord, the D-Day invasion of Normandy on June 6, 1944. 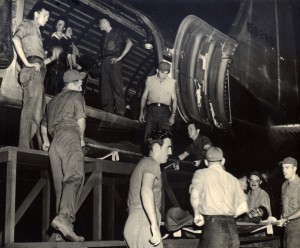 In the Pacific such was the enormity of the logistics requirements that a single squadron, the Hawaii-based VR-11, boasted a complement of 1,000 pilots, and at the height of the war all NATS aircraft in that theater logged 320.000 miles per week. The array of cargo delivered included equipment, personnel, and, most importantly for G.I.s, millions of pounds of mail. As the island-hopping campaign progressed, flight nurses became integral parts of the crews on some VR aircraft employed for casualty evacuation, with some personnel from VR-11 selected to man a new squadron, Air Transport Evacuation Squadron (VRE) 1. During the Okinawa campaign, VRE-1 aircraft covered nearly 1.25 million miles in evacuating nearly 10,000 casualties from the embattled island to hospitals on Guam.

The end of World War II brought the beginning of the end for NATS. The command survived until July 1, 1948, when after six and one half years of operations, it was disestablished after its squadrons had been consolidated with the Air Force Air Transport Command to form the Military Air Transport Service (MATS). Though VR squadron aircraft no longer had “Naval Air Transport Service” painted on their fuselages, their foundation would always be in that organization formed in the darkest days of World War II that was a lifeline for victory on the front lines of battle.