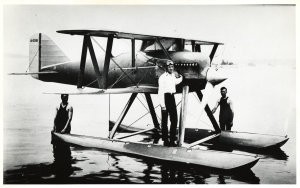 Lieutenant Dave Rittenhouse stands on a float of the CR-3 racer in which he captured the 1923 Schneider Trophy race.
Download

With aerial combat during World War I having proven the value of air power in a variety of roles and missions, the years immediately following the end of the Great War marked the opening chapter in what would be called the “Golden Age” of aviation.  This was certainly the case in the development of aircraft and the engines that powered them, as manufacturers increasingly pushed the envelope with their designs.  The ultimate proving grounds were the air races that became increasingly popular during the 1920s and 1930s, with both military and civilian pilots vying for the status of flying faster than anyone else, individual speed records lasting for just a very short time in the fast-paced racing arena.  With Army and Navy vying for limited appropriation dollars, the races also marked peacetime battlegrounds between the two services.

Having been the Navy’s primary supplier of aircraft since the sea service ordered its very first flying machines from his company in 1911, Glenn Curtiss received a contract for the production of two racing aircraft, identified as Curtiss Racer  No. 1 and Curtiss Racer No. 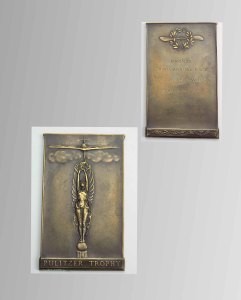 2 on June 16, 1921.  Biplane designs, the streamlined aircraft incorporated 425 horsepower Curtiss CD-12 engines fueled by an equal mixture of Benzol and gasoline, the former improving the smoothness at which the engine ran and also boosting acceleration.  Flying wires and wing struts were designed with the reduction of drag in mind.

The two CR aircraft were destined to make quite a splash on the air racing circuit, their brief service marked by incessant tinkering and redesignations as the Navy and Curtiss sought to improve performance.  They operated on both wheels and floats, the latter for competition in the Schneider Trophy race, which was restricted to seaplanes.  Curtiss test pilot Bert Acosta flew one of the aircraft to victory in the 1921 Pulitzer Trophy Race, and the following year, with Lieutenant Harold Brow at the controls, a CR placed third.  The 1923 Schneider Trophy Race witnessed Lieutenant David Rittenhouse and Paul Irvin claim the gold and silver respectively.