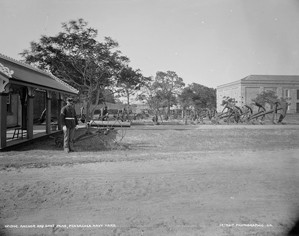 The Pensacola Navy Yard as it appeared around the turn of the century before its closure.
Download

In August 1911, Assistant Secretary of the Navy Beekman Winthrop responded to questions posed by U.S. senators regarding the decision to close the Pensacola Navy Yard, citing the heightened cost of maintaining the facilities and equipment there in comparison to other navy yards performing similar functions. His words contained an important caveat. “It is not proposed to dismantle it [the navy yard]…All its equipment will be placed in condition so it will be preserved for future possible use.” To outside observers, that there was a “future possible use,” was at best questionable, an Atlanta Constitution editorial commenting on the navy yard at Pensacola and others like it. “For the most part these navy yards have come down to us from a former generation…Under modern conditions…they are practically worthless as naval bases and navy yards.”

At the time, the “modern conditions” of naval warfare involved giant battleships dueling on the high seas with thundering guns, not operations by flimsy airplanes of the type then being flown by the Navy’s first aviator, Lieutenant Theodore G. Ellyson. Yet, time would change that and, ironically, when in late 1913 the Navy’s Chambers Board recommended Pensacola as the site for the U.S. Navy’s first aeronautic station, it marked the foundation of a new era where those who learned to fly there changed the course of history.