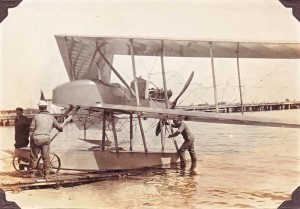 View of a Burgess-Dunne seaplane, a unique design for the time with its swept-back wing, at Naval Air Station Pensacola.
Download

While Pensacolians had become accustomed to seeing airplanes in the skies over their city, it was a unique sight that they observed on January 8, 1917, when an AH-10 seaplane flew at altitudes of just 100 and 200 ft., a machine gun rattling in the cockpit during one of the Navy’s early airborne test of a flexible-mount gun arrangement. More striking than the nature of the test was the airplane that was the platform for it.

While aircraft manufactured by Glenn Curtiss and the Wright Brothers were the mainstays of the Navy’s diminutive air arm during its first years of operation, the establishment of Pensacola as an aeronautic station to conduct training and study the science of aviation brought designs from other manufacturers to the Florida panhandle. Among the most unusual, at least in appearance, was a design that was the result of a licensing and manufacturing agreement between the Blair Atholl Aeroplane Syndicate of Great Britain and the Burgess Company of Marblehead, Massachusetts.

The formation of the former company was spearheaded by an Irish-born aeronautical engineer and British Army cavalry officer named John William Dunne, who during the early 1900s designed and evaluated a series of aircraft for the British armed forces. Among them was the D.5, in which Dunne demonstrated the stability of his tailless, swept-wing design during a 1910 flight whose observers included Orville Wright. The follow-up D.8 greatly resembled the D.5 and it was this aircraft that Burgess received a license to build in the United States.

The resulting Burgess-Dunne seaplanes were designated AH-7 and AH-10 (AH standing for heavier-than-air aircraft of the hydroaeroplane type) when they were accepted by the U.S. Navy in 1916. A pusher aircraft with its engine positioned in the rear of the fuselage and the propeller facing aft, these Burgess-Dunnes incorporated 30-degree sweptback wings and featured a singled pontoon float for water operations. Flying the airplane involved the use of two levers, each controlling a flap. Pushing the levers forward or pulling them back simultaneously controlled altitude, the movement of the flaps forcing the wingtips, which due to their positioning acted like a tails, in the opposite direction. Alternately pushing one lever forward and pushing one back simultaneously controlled turns.

The gunnery tests of 1917 proved the high point of the short-lived careers of the Burgess-Dunnes, but there was no aircraft quite like it during the era.